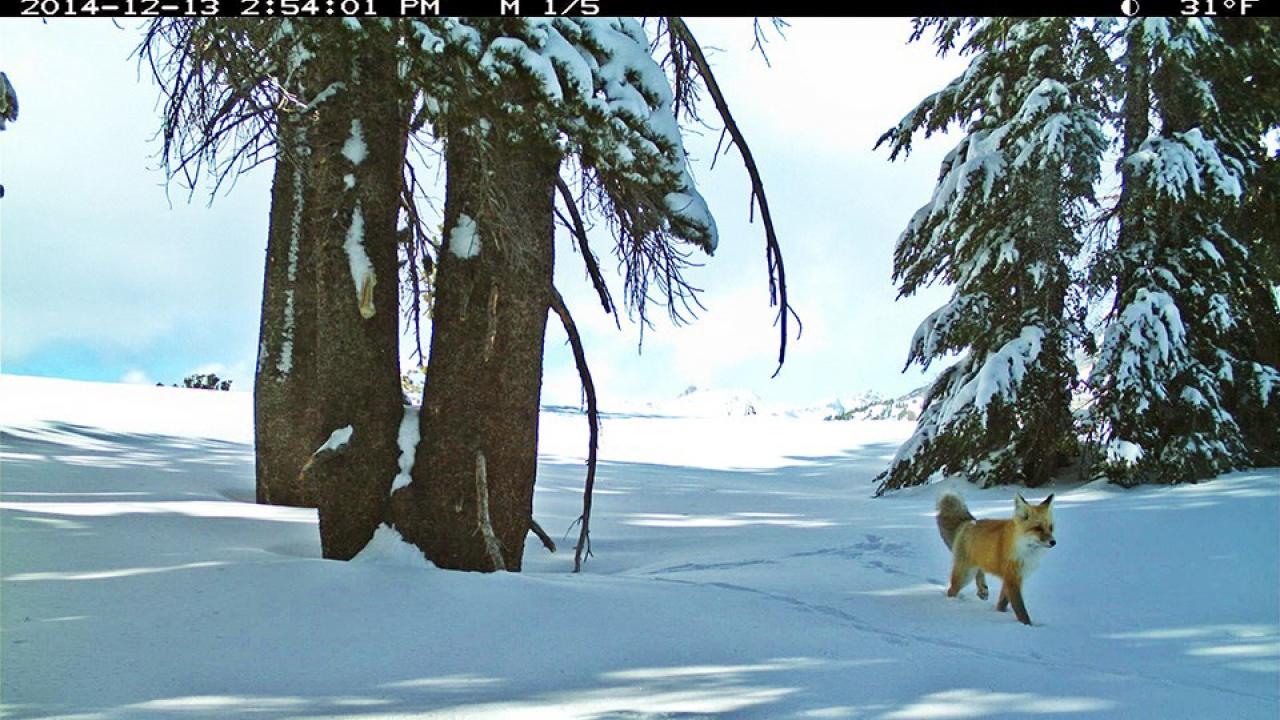 There’s an elusive fox roaming the southern Sierra Nevada, and experts are trying to learn more about its behavior and breeding success by analyzing one of the few traces of its presence — poop.

Living in areas above 9,000 feet in elevation, the fox is smaller than most, has fuzzy paws, and a thick fur coat–all adaptations to help it survive the heavy winter snows and challenging alpine conditions. Its fur can range in color from red to black to grayish-brown.

Recently proposed to be listed as an endangered species by the U.S. Fish and Wildlife Service, the southern population of the Sierra Nevada red fox is estimated to consist of fewer than 50 individuals. Recent hybridization with non-native red foxes that escaped from fur farms and other alpine foxes that traveled from Nevada or the Rocky Mountains has put this subspecies at-risk of going extinct.

Collecting information on the fox is difficult. It’s rarely seen — deftly avoiding trail cameras and live traps. However, ongoing research is helping to paint a picture of the fox, its behavior and breeding success.

Since 2011, Cate Quinn, a post-doctoral researcher in UC Davis’ Mammalian Ecology and Conservation Unit, has been studying the fox by collecting its scat (the term preferred over poop, at least in the science world). In the science world, this type of tracking is called noninvasive genetic monitoring. It typically involves collecting DNA from scat, urine or hairs left behind in the great outdoors in lieu of using tracking collars that require capturing live animals.

“The DNA found in scat is very powerful. You can tell which fox it came from and who they’re related to. This information helps us learn more about their movements across the landscape, their lifespan and which other types of foxes they’re breeding with,” said Quinn.

Each year, starting in the late summer, Quinn and her team head out to four core locations between the northern border of Yosemite National Park and Highway 4 in the Sonora Pass to collect scat. The team collects anything that could be fox scat (some turn out to be coyote) and takes it back to the lab for analysis. While some trips can be completed in a day, others require backpacking across rocky mountain ridges for up to five days, constantly scanning the ground for scat, and hauling any scat collected the entire trip. Approximately 400–500 samples are collected each year. The samples help create the “family tree” of the individuals living in the high Sierra.

“This annual census enables us to take the pulse of the Sierra Nevada red fox population. The information helps us answer key questions like: Are there big dramatic changes in the population? Is mortality going up or down? Is reproduction stopping?” said Quinn.

In 2018, Quinn added dogs from Rogue Detection Teams, owned by Jennifer Hartman, to the team of scat collectors. The dogs are specially trained to sniff out fox scat, and their keen sense of smell can find it more easily than the human eye, especially in areas where the foxes’ presence is rare or unknown. The dog and its handler travel to several locations each year to support the collection efforts. They, too, backpack for several days across the high Sierra sniffing for traces of the fox.

Rogue Detection Teams train dogs to sniff out fox poop, and their keen sense of smell can find poop more easily than the human eye, especially in areas where the foxes’ presence is rare or unknown. This dog, named Filson, has tracked fox scat as seen in the foreground. Courtesy of Rogue Detection Teams

Once back in the lab, the DNA analysis tells a more detailed story. Quinn and her team have been able to identify and track the same individuals for several years and have found that the foxes are long-lived. They also travel long distances. One individual she’s tracked traveled more than 60 miles in just one year.

The DNA also shows that hybridization continues with non-native foxes, however, that’s not entirely bad. There’s a concern that too much inbreeding between pure Sierra Nevada red foxes could lead to more detrimental impacts to the species than some level of hybridization. Breeding with non-native or other alpine foxes — to a certain point — could be helpful for maintaining the Sierra Nevada red fox DNA and ensuring the longevity of the species.

“The foxes have been here for thousands of years, which shows that they’re resilient. That gives me hope that they will persist if we can figure out ways to keep them going,” said Quinn.

While more information is gathered, efforts are already underway to help the fox. A group of representatives from the Service, National Park Service, U.S. Forest Service, California Department of Fish and Wildlife, Marine Corps Mountain Warfare Training Center, and biologists from universities and the private sector are developing a conservation strategy for the Sierra Nevada red fox. This strategy will guide and prioritize recovery actions, such as translocations and possibly introducing other alpine foxes to support breeding. Additionally, the Forest Service, Park Service and Department of Defense have resource management plans on the lands they manage that minimize forest fragmentation and limit activities that could disturb Sierra Nevada red fox breeding and denning areas.

“This research is helping us get a better understanding of where the foxes are living, their breeding and movement, and how their home ranges and genetics are changing over time. This information is incredibly useful as we determine ways to help recover this unique species,” said Eyes.

While Quinn’s research will continue to shed light on the secretive fox, partners are optimistic that this species will remain part of the Sierra landscape, even if the only trace of their presence are the brown piles they leave behind.