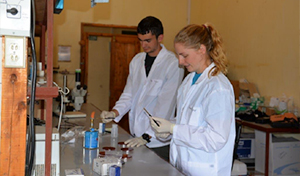 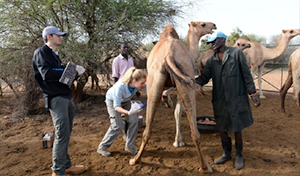 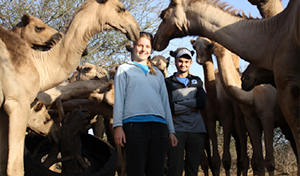 Karibu Kenya or “Welcome to Kenya” in Swahili. This summer I had the opportunity to return to the Mpala Research Center in Laikipia, Kenya.  While at Mpala I conducted a STAR research project on domestic dromedary camels. My research focused on determining risk factors for mastitis and high bacterial contamination of raw camel milk. This project involved a long and intensive planning process and four mentors, two from UC Davis, one from the St. Louis Zoo, and one at the Mpala Research Center itself.

My interest in camels and Kenya developed during the time I spent working at this very same research center prior to vet school.  Mpala is situated in Laikipia, Kenya. Laikipia is a unique and complicated place because the great variety in landownership and management practices as well as the co-existence of both cattle ranching and large wildlife populations that contribute to ecotourism. In the midst of this interplay is a growing camel population. Camels are becoming an increasingly popular livestock species because they are more drought tolerant than cows, sheep, or goats. Despite the growing camel population there exists little veterinary knowledge about camels including their husbandry what diseases they may bring with them.  Great potential is seen in Kenya’s camel milk market, yet low production is still an issue. I was interested in assessing risk factors of mastitis because mastitis is a major cause of low milk production. In addition, I was interested in the bacterial load in raw camel milk because most camel milk consumers in Kenya are consuming raw milk, which is a risk for disease transmission.

In addition to the opportunity to conduction research and learn more about camels, this experience also allowed me to return to place that had previously become like a second home to me.  It was wonderful to reconnect with employees of the research center with whom I had worked extensively as well as the many friends I had made previously. Upon my return I instantly felt like I was welcomed back by a large extended family.

Much of my time in Kenya was spent getting up before the sun to go visit camel herds at the time of their morning milking. The frequent sightings of elephants, hyenas, cheetahs and other wildlife made those early mornings worth it. My translator and I spent many hours together driving to these herds and became good friends. I discovered that not only could he find his way where there were no roads, seemed to know everyone within a 50km radius the research center, and spoke seven languages, but he’d also starred in a National Geographic TV show! He was a camel owner himself, and it was wonderful to see his excitement and interest to learn more about camels from the project.

I spent the rest of my time in the lab at the research center culturing and trying to identify bacteria from mastitis-positive camels and from the raw camel milk people stored. Despite some late nights in the lab, I did get some free time to relax. I spent my time playing soccer with the research center’s employee team on a soccer pitch that boasts a spectacular view out over the savanna towards the giant Mt. Kenya. In the evenings we cheered for our favorite World Cup soccer teams. We also went on numerous game drives in search of wildlife. Sundowners, which involves watching the sun set from a scenic spot with friends, was a wonderfully relaxing tradition I’d discovered last time and fully appreciated again this summer.

Despite numerous logistical challenges, this summer was an amazing experience. I am grateful to the SVM International Externship Fund for the opportunity to learn more about camels and return one of my favorite parts of the world.