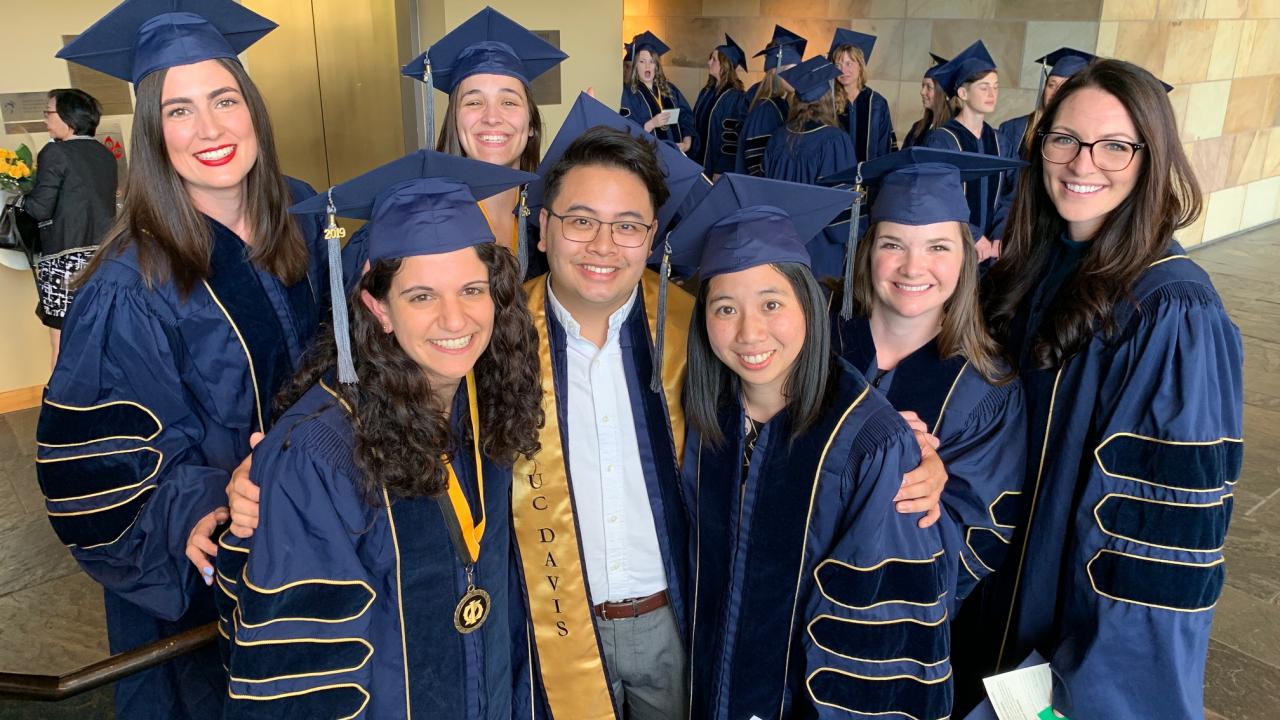 Congratulations to the Class of 2019 who received their degrees from the UC Davis School of Veterinary Medicine in its 68th Commencement Ceremony held at the Mondavi Center on May 24th. Among those graduating were 138 DVM students, 30 residents and 11 students in the Master of Preventive Veterinary Medicine program.

Following opening remarks and a welcome from Dean Michael Lairmore and Provost Ralph Hexter, Dr. Sharon Stevenson, managing director of Okapi Venture Capital, gave the commencement address. She asked the graduating students, “How will you make this degree yours…and yours alone?”

Stevenson described her circuitous career path from a “dog doctor from Colombus, Ohio” to a successful entrepreneur. She came to UC Davis to pursue a Ph.D. after her husband took a position here. She hadn’t initially planned on that route, but had enjoyed research as a student and the opportunity presented itself. That led to a faculty position at a medical school as the only non M.D. A job in a biotech company later led to pursuing an MBA. She eventually co-founded Okapi Venture Capital, and is responsible for the firm's life sciences investments.

“What we want and what makes us happy changes as we go through life,” Stevenson said. “Whether good or bad, life changes. Everything is changing all the time—embrace the change. Life is a grand adventure; enjoy it.”

Dr. Munashe Chigerwe was chosen by the students as their faculty speaker—a role he was also honored with in 2013. With his customary quiet sense of humor, he explained to the graduates why he entitled his speech, “I saw you.”

“I saw you laugh, being angry, coming to class late, rolling your eyes, scared, swearing and cussing. I saw you stretch your minds (you made us stretch ours too), attend your patients, and run away from an angry cow. I heard you say—did you make that up? And today, I hear you say—I’m ready. Ready to be doctors.”

“I also learned from you that consuming two leaves of spinach and two donuts is considered a healthy meal! And that losing your cell phone makes you less human.”

When Chigerwe asked the chief in his home village in Zimbabwe for advice on what to present, she told him to either tell a story or give them best wishes.

“So I wish you the strength of a rhino, that you stand tall as a giraffe. I wish you brains the speed of a cheetah and I wish you find your way like an elephant matriarch. As you leave this place to make a living, please don’t forget to live your life. We’ll miss you around here.”

Dean Michael Lairmore urged graduates to reflect on their time at UC Davis and cherish the memory of their time training here.

“You’ve inspired us and each other. You’ve deepened the school’s legacy,” Lairmore said. “As Stephen Covey says, live life by a compass, not a clock.”

Student speaker David Garcia kept the laughs coming with his self-deprecating humor about always rambling on too long and failing to get to the point.

“Since we met in prologue and had to wear weird color-coded shirts for a week, we’ve learned and collectively forgotten a large amount of knowledge, tested shock collars on each other (sorry, I should have stopped pushing the button sooner) and over the last four years, gotten a combined 18 hours of sleep.”

On a more serious note, Garcia thanked all of the faculty, staff and residents who had set an example for the graduates to emulate and provided a strong support system.

Dr. Diane Craig, president of the California Veterinary Medical Association, led the graduates and all DVMs present in reciting the veterinarian’s oath.

A recording of the Commencement can be viewed here.