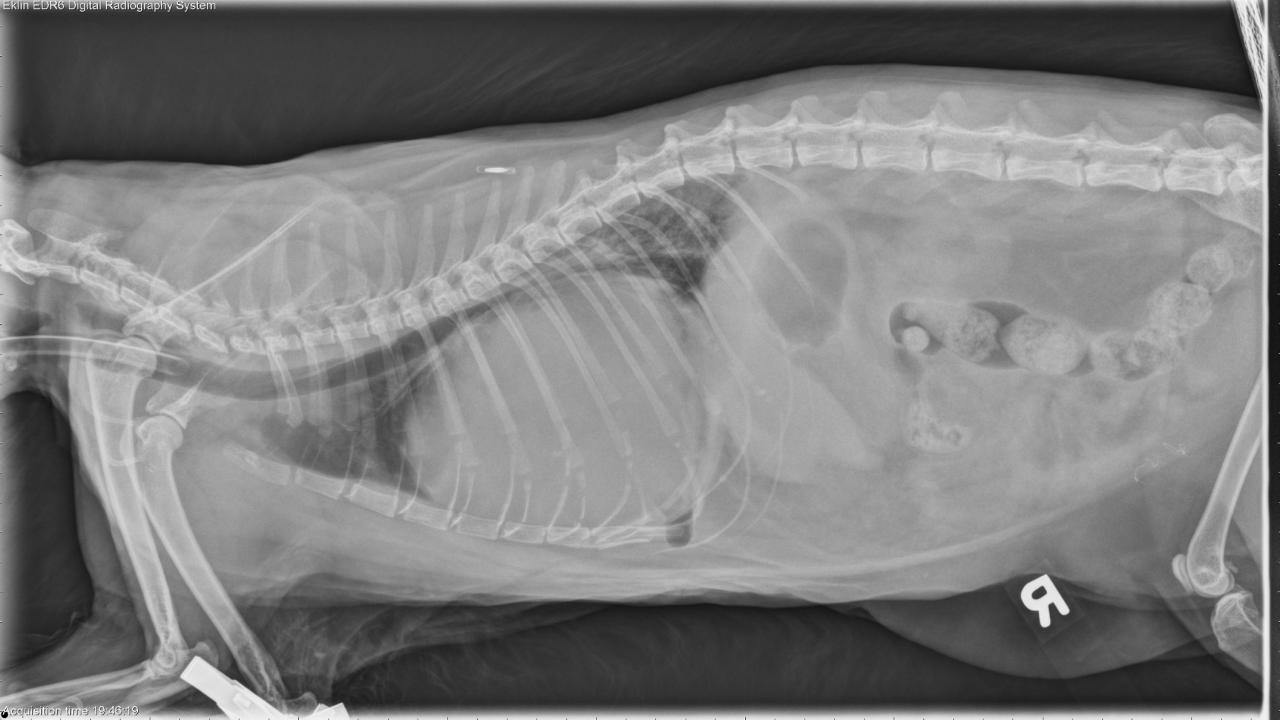 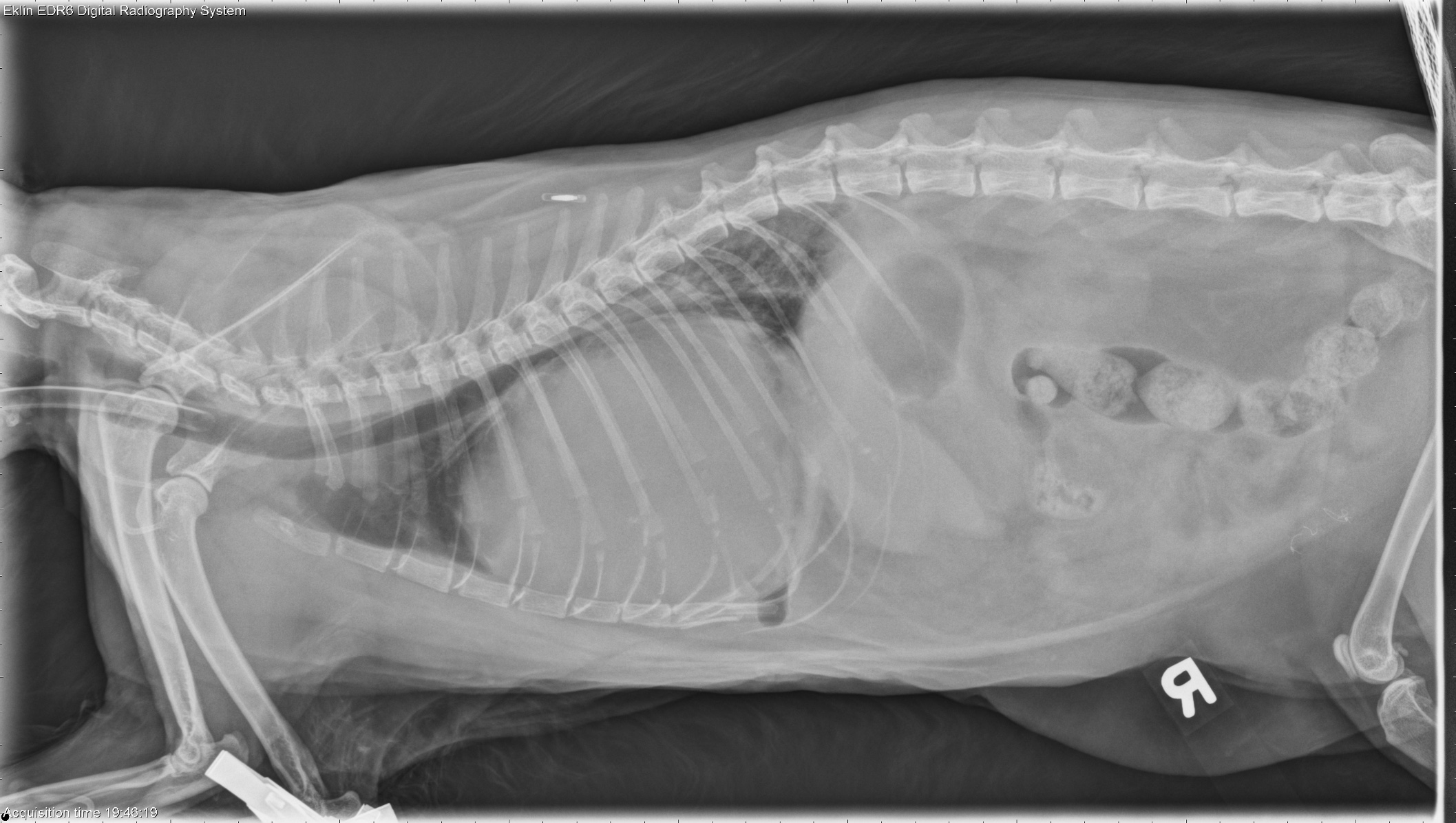 Three orthogonal images of the thorax including a large portion of the abdomen are available for interpretation. The cardiac silhouette is severely enlarged with globoid appearance filling approximately two thirds of the thoracic cavity, and spanning the entirety of the thoracic width on the VD image. There is marked dorsal elevation of the carina as a result with the carina contacting the ventral margin of the vertebral column. The lungs are reduced in volume as a result of the enlarged cardiac silhouette. There are other patchy regions of fat opacity within the enlarged cardiac silhouette. No abdominal organs are definitively herniated cranially. There is ample falciform fat in the cranioventral abdomen and the liver appears within a normal position in the cranial abdomen, although there is border effacement of the diaphragm and cardiac silhouette. Within the caudodorsal lungs, there is a bronchointerstitial pulmonary pattern, which mildly improves on the VD image. The pulmonary arteries and veins are largely obscured by the enlarged cardiac silhouette, but the ill-defined margins of the pulmonary arteries and veins do appear enlarged in the caudal lung lobes. The cranial lobar pulmonary vasculature is normal. Within the abdomen, there is decreased peritoneal serosal detail consistent with the peritoneal fluid. The kidneys are small with irregular capsular margins. The patient is intubated with an endotracheal tube extending through the thoracic inlet.

Markedly enlarged globoid cardiac silhouette could represent a peritoneal- pericardial diaphragmatic hernia (PPDH) or a combination of other pericardial space occupying lesions such as pericardial effusion, pericardial mass (fat and/or soft tissue), or combination thereof. Despite the large amount of liver within the abdomen, a herniated portion of liver into the PPDH with subsequent congestion, hemorrhage, cyst formation or neoplastic transformation is possible. Caudodorsal pulmonary parenchyma atelectasis, with possible pulmonary vascular dilation. This pulmonary pattern may also represent non-cardiogenic edema from airway obstruction, as a result of the enlarged cardiac silhouette, or cardiogenic pulmonary edema from left-sided cardiac failure or fluid overload. The combination of possible pericardial effusion and abdominal effusion may be due to heart failure or fluid overload; however, other etiologies for peritoneal effusion including inflammatory effusion, neoplastic effusion, ascites, or hemorrhage are also possible. Chronic degenerative renal changes. An ultrasound of the abdomen and echocardiogram is recommended for further evaluation of these findings.

The patient was taken directly to surgery. During surgery, a large pericardial mass structure was discovered to be the cause of her respiratory signs, as it was taking up a large volume in her chest and compressing her heart, lungs, and airway. Histopathology of the mass was consistent with a hepatic myelolipoma.

Myelolipomas are extremely rare tumors in veterinary species, however a few cases of hepatic myelolipomas have been reported in cats with congenital peritoneopericardial diaphragmatic hernias. In one of the papers cited below Schuh speculates that myelipomas originate as metaplastic changes in the liver consequent to ongoing hypoxia caused by the liver's entrapment in the hernia, however this theory has not been proven. In this case, the entrapped hepatic parenchyma was surprisingly viable and normal, however capillarization suggests chronic congestion. Nonetheless, myelolipomas are composed of normal and benign haematopoietic elements and unlikely to recur with correction of the hernia.