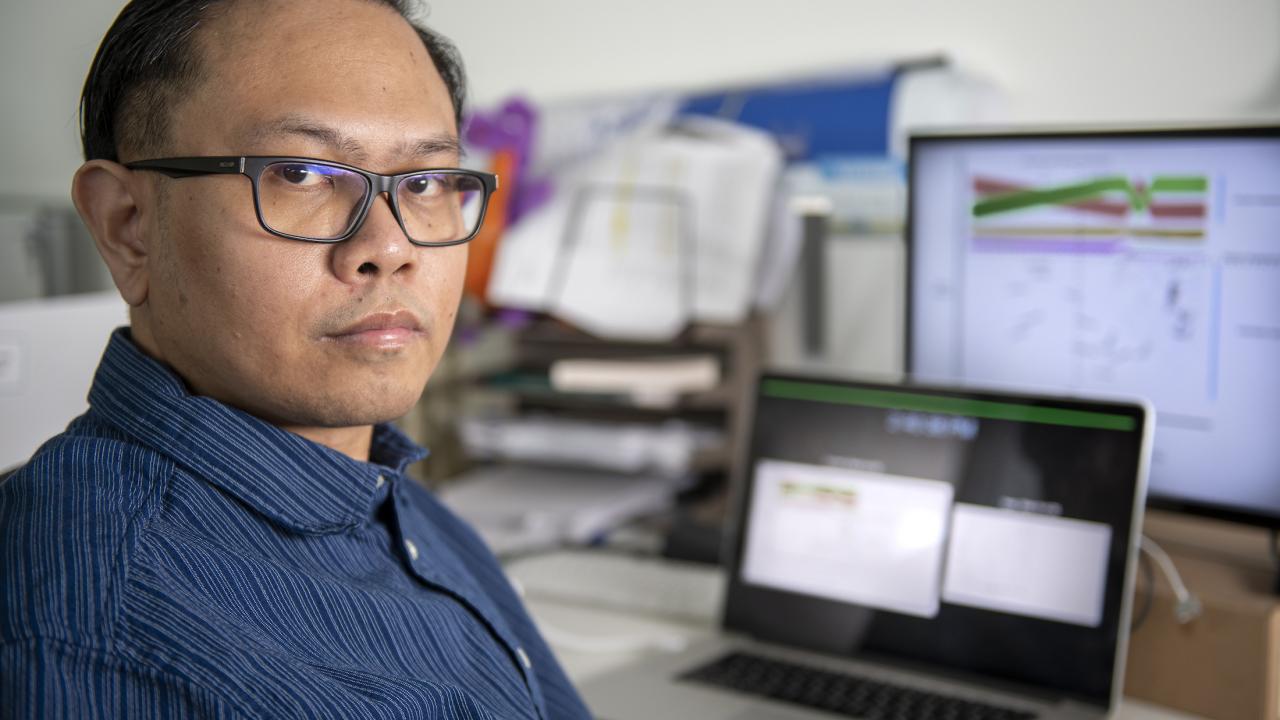 Genome sequencing of thousands of SARS-CoV-2 samples shows that surges of COVID-19 cases are driven by the appearance of new coronavirus variants, according to new research from the School of Veterinary Medicine at the University of California, Davis, published April 1 in Scientific Reports.

“As variants emerge, you’re going to get new outbreaks,” said Bart Weimer, professor of population health and reproduction at the UC Davis School of Veterinary Medicine. The merger of classical epidemiology with genomics provides a tool public health authorities could use to predict the course of pandemics, whether of coronavirus, influenza or some new pathogen.

Although it has just 15 genes, SARS-CoV-2 is constantly mutating. Most of these changes make very little difference, but sometimes the virus becomes more or less transmissible.

Weimer and graduate student DJ Darwin R. Bandoy (shown in image above) initially analyzed the genomes of 150 SARS-CoV-2 strains, mostly from outbreaks in Asia prior to March 1, 2020, as well as epidemiology and transmission information for those outbreaks. They classified outbreaks by stage: index (no outbreak), takeoff, exponential growth and decline. The ease of transmission of a virus is set by the value R, or reproductive number, where R is the average number of new infections caused by each infected person.

They combined all this information into a metric called GENI, for pathogen genome identity. Comparing GENI scores with the phase of an epidemic showed that an increase in genetic variation immediately preceded exponential growth in cases, for example in South Korea in late February. In Singapore, however, bursts of variation were associated with smaller outbreaks that public health authorities were able to quickly bring under control.

Weimer and Bandoy then looked at 20,000 sequences of SARS-CoV-2 viruses collected from February to April 2020 in the United Kingdom and compared them with data on cases.

They found that the GENI variation score rose steadily with the number of cases. When the British government imposed a national lockdown in late March, the number of new cases stabilized, but the GENI score continued to rise. This shows that measures such as banning gatherings, mask mandates and social distancing are effective in controlling spread of disease in the face of rapid virus evolution.

It could also help explain “superspreader” events, when large numbers of people get infected in a single incident where precautions are relaxed.

Weimer said he hopes that public health authorities will take up the approach of measuring virus variation and linking it to the local transmission rate, R.

“In this way you can get a very early warning of when a new outbreak is coming,” he said. “Here’s a recipe for how to go about it.”

Parts of the work previously appeared online as a preprint. Bandoy is sponsored by the Philippine California Advanced Research Institute.