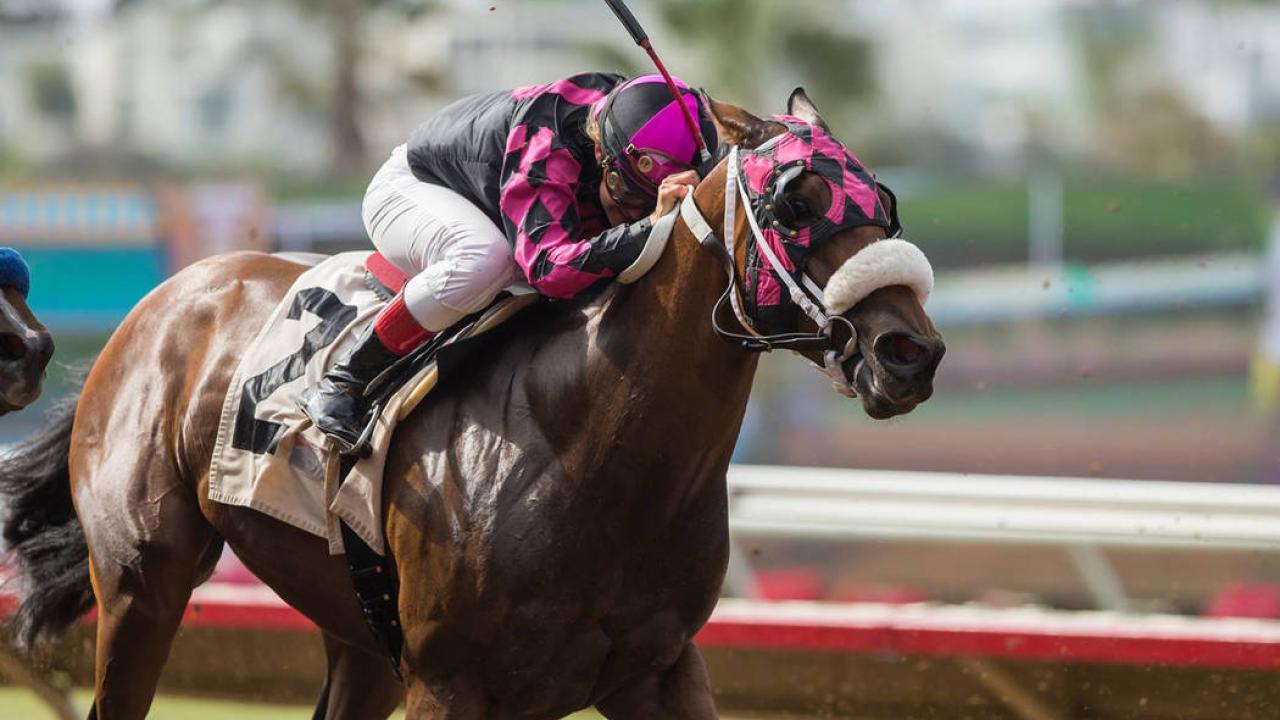 That’s a Doctor, via UC Davis, Who Rode That Last Winner

By Bruce Gallaudet for the Davis Enterprise

From an early age, growing up in Roseville, Ferrin Peterson was an accomplished English-style and dressage rider.

She was a spectacular athlete in high school, then later at Cal Poly. As a pole vaulter, she set a record that still stands at Oakmont High.

After graduating with her animal sciences degree in San Luis Obispo, Peterson went on to earn her DVM at the UC Davis School of Veterinary Medicine. It was while at UCD that internships and study grants took her from California to Kentucky to Japan, Ethiopia and Dubai.

Oh, and did we mention that Peterson is currently working as a thoroughbred jockey?

Coming off a recent meet at Monmouth Park where she was the second-leading rider, the 28-year-old now hangs her tack at Aqueduct Racetrack in New York.

“I’ve always looked for open doors and opportunities,” Peterson told The Enterprise. “I was fortunate when I was at UC Davis …”

Peterson relates that the husband of her Vet School colleague Monica Romero was a jockey; he told the aspiring rider that the pair “could teach me how to be a jockey.”

Working with the Romeros was followed by breaking horses with trainer Ellen Jackson before getting live mounts at fair-circuit tracks and Golden Gate Fields in Albany.

It was on March 11, 2018, that Peterson broke through, winning her first race on Lovely Lioness at Golden Gate for conditioner Aggie Ordonez.

A couple of wins later, Peterson got a mount at Del Mar, and her career was off and running.

It was “where the turf meets the surf down at old Del Mar” that Peterson met Julie Crone, the Hall of Fame jockey who became a riders’ agent.

Crone was impressed with Peterson and, before long, became her representative.

“She’s so mentally tough,” Crone once told Horse Racing Planet. “And people really like her … plus, she never makes the same mistake twice. She’s sharp and heads up.

“Everyone enjoys her company, but she’s tough as nails and so consistent. She loves riding racehorses and loves being at the track.”

But being at the track, especially at Aqueduct as a newcomer, can be a grind. After her uber-successful stay at Monmouth, Peterson certainly could fit into one of the toughest rider colonies on the planet, Crone believed.

But during that transition to Aqueduct, Crone returned to the West Coast to be with family, leaving Peterson without an agent. Still looking for the right rep, Peterson said her winter in the Big Apple has been a challenge:

“So far, I’ve had a pretty tough meet,” Peterson said. “With COVID, all the top jockeys stayed here, otherwise, some would have gone to Florida or out West.”

Without Crone’s presence, mounts for the UCD grad have been few and mostly longshots. Through the first half of the meet, the 5-foot-4, 110-pound rider hasn’t been in the winner’s circle.

To make connections in an established riders’ colony without an agent means one has to be seen, interact and offer oneself for workouts. But during the pandemic, jockeys and agents haven’t been allowed in shed row.

“With COVID, it’s been really hard to network,” Peterson pointed out. “All of the other jockeys already have all of their connections. So, yeah, it’s been a strange season to make that transition.”

Still, that successful meet in New Jersey and her part-time work at a small-animal general veterinary practice has paid the bills.

Peterson knows her background gives her myriad roads to travel, but she hasn’t moved off her childhood dream — and she knows that brighter days are ahead.

“The long-term goal is to be a jockey,” a determinted Peterson relayed.

A lot of that stick-to-it-ness comes from her work with her former agent.

“Julie was such an inspiration,” says the student. “Great as a teacher, able to articulate the finer points (for) a rider, including the mental aspect.”

But it was Peterson’s parents who provided the early nurturing and encouragement.

Her father, Rad, is a sixth-grade teacher who doubled as Ferrin’s pole vault coach: “He’s been a big supporter of my jockey career because he likes high-adrenaline sports.”

It was mom Connie, a family and marriage counselor, who introduced Ferrin to the world of horses very early in life.

“She’s the one who taught me to ride,” Peterson said. “When I was a baby, she’d put me in her lap and we’d go on trail rides. She was my first riding instructor … and she also loves it that I’m a jockey.”

Peterson knows that once things return to normal, with her educational background, she’ll have a leg up on many of the other jockeys:

“Just having that veterinary knowledge and being able to have those conversations with trainers and owners, I think they do appreciate that.”

Soon, once the pandemic shakes out, trackside public-address systems once again will be blaring, “Paging Dr. Peterson to the winner’s circle. Dr. Ferrin Peterson.”

Notes: While studying at UCD, it wasn’t unusual for Peterson to wake at 4 a.m., drive 60 miles to Golden Gate Fields to start working out horses at 6 a.m., ride for 90 minutes, then blaze back to campus in time for class. Then she’d often work at the clinic until 7 p.m. or later … Peterson won her first stakes race on Share The Ride in the Mr. Prospector at Monmouth (Sept. 12, 2020). … While at UCD, Peterson received the Zoetis Equine Scholarship.

Read at the Davis Enterprise