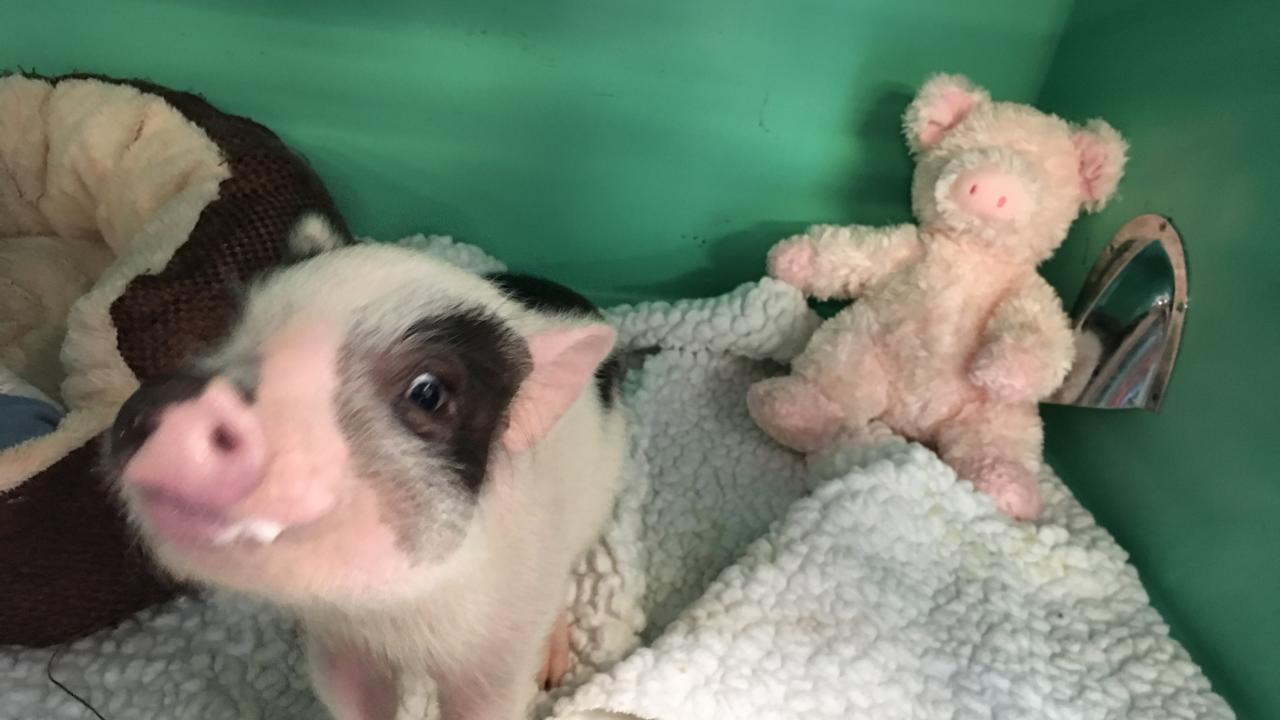 ***Click here for CBS Sacramento coverage of this story***

Pickles, a 5-month-old male potbellied pig, was brought to the UC Davis veterinary hospital after he started coughing up blood and vomiting. He was diagnosed with an acute hemothorax (blood in the thoracic cavity) causing severe anemia and was extremely unstable. After major trauma was ruled out via diagnostic imaging techniques such as radiographs and ultrasound, treatment for suspected rodenticide intoxication was initiated immediately by the Livestock Medicine and Surgery Service.

Approximately 60cc of hemorrhagic pleural effusion (resembling whole blood) was removed from each side of the thorax under general anesthesia. Part of the collected fluid was submitted for cytology and culture; the rest was auto-transfused back to Pickles via intravenous catheter, as pig blood was not available and Pickles’ packed cell volume was 4 percent (normal range is 32-50 percent).

While the hospital maintains the largest blood bank in the Western United States (storing blood from dogs, cats, horses, goats, cows, llamas, sheep and donkeys), it does not store blood from pigs due to the difficulty of obtaining donations from them.

Pickles needed another blood transfusion within hours if he was to survive. His owner turned to a local resident who owns several pigs. She immediately came to the rescue, bringing a pig to the hospital within an hour. Unbeknownst to the owner, though, the pig was pregnant and ineligible to be a donor.

The frantic search continued and turned up a 450-pound pig for sale online. The pig was located in Lincoln, California, about an hour from Davis. After locating transportation (again found on the internet), the blood donor pig was on its way to Davis to save Pickles’ life.

Pickles received multiple transfusions and responded well to them and the medications he was given. However, he had a major relapse two days after initiation of those. He was found in his stall in respiratory distress, had lost a significant amount of blood (likely through one of his catheter ports which displayed signs of being chewed on) and showed severe neurologic signs such as repetitive, uncontrolled eye movements. This was most likely caused by a lack of oxygen to the brain and other tissues. Shortly after he was resuscitated, Pickles developed seizures, which were difficult to control for more than six hours. In total, he endured nine seizures before they were finally under control using a variety of medications.

Every staff member involved in Pickles’ treatment protocol vigilantly observed for respiratory distress, bleeding from nose/mouth, vocalization, gurgling/tackling lung sounds, vomiting, diarrhea or any other concerns and/or complications. He remained on “seizure watch” for the remainder of his stay. Pickles spent the next six days in an oxygen chamber to help his body receive the oxygen it needed.

Pickles began to make a miraculous recovery, and overcame all of his neurological complications. He responded well to treats, consisting of blueberries, raspberries, cherry tomatoes, broccoli, and edamame, as well as his regular meals of pig chow, which he eat enthusiastically.

After nine days of supportive care in the intensive care unit, Pickles was discharged. He continues to do well at home, and recently was certified as a therapy pig, which enables him to visit schools and other public institutions.

As for the donor pig, she was named Tickles and found a home with one of Pickles’ 6,000 Instagram followers. When word went out on Instagram, hundreds of followers started calling animal sanctuaries and farms throughout California, ultimately finding Tickles a home in Napa.

livestock medicine Case of the Month