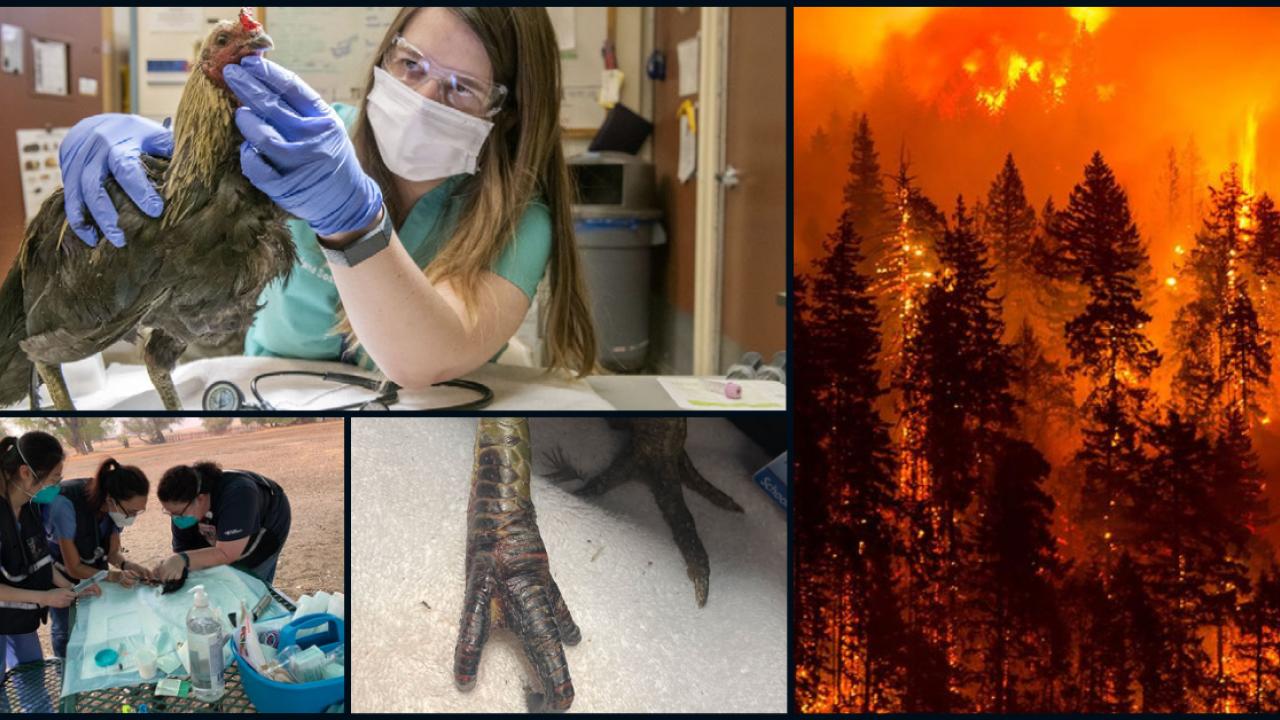 California Wildfires: Compounding the Impacts of Climate Change in the Anthropocene

Ten long months ago, we were writing to you about the Australian bushfires. Not long before that, we discussed the fires ravaging the Amazon. Now the past several months have brought us a record-setting wildfire season in California; five of the largest fires in the state’s history have happened in 2020 with over 4.4 million acres burned. Unfortunately, we are seeing intensification of fires in the state. The previous most deadly season was in 2018, where 1.67 million acres burned. Mortalities were numerous this year, but notably devastating was the loss of 2 California Condor chicks and 9 presumed-dead adults from the CNU Lightning Complex Fire near Santa Cruz in August. Biologists and veterinarians anticipate that many more animals across all taxa will die in the fires’ aftermath of dehydration or starvation. We will witness the long-term loss or conversion of habitat where fires have burned too hot, loss of nesting habitat, decreased fitness of individuals due to chronic smoke inhalation, and increased migration mortality as birds find their stopovers destroyed. Since the scope of these fires is unprecedented, the full impact on ecosystems and populations will not be understood for months to years to come.

While California, like Australia, has many ecosystems dependent on regular wildfires, experts warn that burns that are too frequent or exaggerated in intensity are far outside of the “norm.” Multiple species flourish with low-intensity fires every few years, which clear combustible materials from ground habitat and allow other species to move in. Some of California’s iconic species depend on fires: Giant Sequoias need fire to crack their seed cones for germination, and the Black-backed woodpecker opportunistically forages in snags (dead trees) left after fires burn. But even these species are having trouble reclaiming a place after intense fires like the ones we’ve seen this year.

Similar to Australia, we are seeing that around human developments intensive fire suppression results in accumulation of combustible material, creating a “tinderbox” effect, ready to ignite with a wayward cigarette or lightning strike. Invasive species are amplifying the combustion potential of California’s wild lands, too. Invasive grasses, such as cheatgrass, recover a lot faster and thrive after burns, not only preventing normal post-burn succession of native species, but creating more fuel for future fires.

Funding is not always available for proper forest management to remove flammable debris, or reclaim land choked by invasive species, which only worsens the risk of uncontrollable fires over time. Tragically, crucial fire management funding had to be diverted from many of these projects to address the COVID-19 pandemic in 2020. Similarly dampening rescue efforts in the past was the 2018 Virulent Newcastle Disease outbreak in California. Birds affected by fires could not be brought to rescue centers for fear of spreading a deadly foreign animal disease. This compounding of multiple disasters is a sobering example of what is to come as humans ignore sustainable practices and the ecosystems with which we are failing to co-exist.

Nearly one in ten U.S. citizens lives in California, not to mention a large portion of the nation’s fruit and vegetable producing agriculture. All the human water usage in the state compounds a drought issue exacerbated by climate change. Pair these risk factors with aberrant weather patterns -- such as Tropical Storm Fausto, an unusually large lightning storm -- and you get wildfires like the LNU lightning complex fire, the 5th largest in California’s history, burning only 30 minutes outside of University of California Davis, where some of our AAV colleagues were evacuated and also involved in disaster response efforts. Many AAV members work in the affected areas, and are rallying forces to address the needs of their communities, the animals they care for, and native wildlife.

The AAV has recently begun a podcast called “Docs of a Feather.” This month, we interviewed AAV member Dr. Michelle Hawkins (VMD, DABVP Avian) of the UC Davis California Raptor Center, and her colleagues Dr. Lais Costa (MV, MS, PhD, DACVIM Large Animal, DABVP Equine), and Dr. Jamie Peyton (DVM, DACVECC, CVA, CVC, CCRP) about their experiences on the front lines. Dr. Peyton is the director of the newly minted Wildlife Disaster Network at UC Davis, a partnership with the California Department of Fish and Wildlife modeled off of the long-standing Oiled Wildlife Care Network.

The UC Davis veterinarians are not only partnering to find and treat injured domestic and wild animals, but they are assisting others in studying the fire’s impacts. Dr. Maurice Pitesky (DVM, MPVM), is currently surveying populations for exposure to environmental contaminants such as flame retardant, among others. We don’t yet know if fires increase species’ exposure to toxic heavy metals found in soils, but researchers are taking a One Health approach to studying animal and human communities living in the shadow of the fires, which will undoubtedly reveal public health threats we must deal with in the future.

If you are living in California or are an AAV member looking to get involved with disaster response efforts, you can consider certification for disaster relief with the Veterinary Response Team via the California medical board. Your expertise as a veterinarian interested in avian species is invaluable; many birds are affected by the fires, and few people know how to assist them. Dr. Hawkins was one of, if not the only veterinarian at the Camp Fire rescue efforts in 2018 who had a familiarity with avian species. If you have this knowledge, sharing protocols and experiences with colleagues internationally in fire-torn areas is a huge help. We have seen that wildfires are a problem across continents, and establishing networks through word-of-mouth can lead to more formal collaborations like the Wildlife Disaster Network mentioned above. Reach out to your AAV colleagues today. We can all be part of solutions for a better tomorrow.