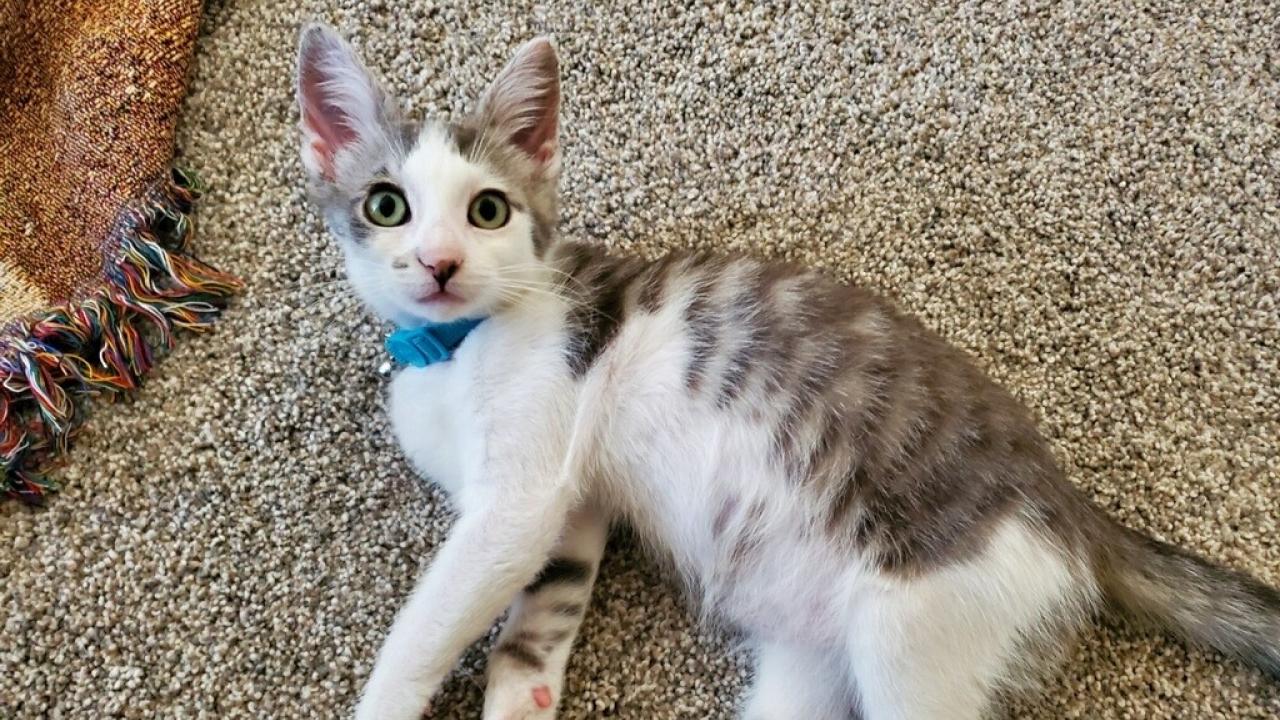 With its new Access To Care Program, the UC Davis veterinary hospital is able to offer more care to pets from underserved communities and populations, as well as shelter animals and strays. Rupert, a male domestic shorthair kitten, recently benefited from multiple Access To Care entities and is now thriving in his new forever home.

In late June, Nikki Saunders, RVT, responded to a social media post in her neighborhood about a found stray kitten that was near death. Saunders brought the cat, later named Rupert by her husband, to UC Davis where she worked as a veterinary technician, hoping her colleagues and veterinary students could help him.

Once examined in the Emergency Room, Rupert was found to be anemic, infested with fleas, dehydrated, unable to walk, and both of his eyelids were sealed shut due to an upper respiratory infection (URI), a common condition in kittens. Radiographs showed femur and pelvic fractures. Once he was stabilized and hospitalized for the night, the Access To Care Program was able to take over his case.

Access To Care was formed to provide a framework for the many community-based initiatives already in place at UC Davis, like the Orphan Kitten Project (OKP), Fracture Program Club, Community Surgery Service, Knights Landing One Health Clinic, and others.

Dr. Karen Vernau is a faculty clinician with the Access To Care Program and also serves as a faculty advisor for OKP and the Fracture Program Club.

“Rupert is an excellent example of these amazing collaborations,” said Dr. Vernau. “OKP was able to take over his care, and we were able to consult with orthopedic surgeons through the Fracture Program on his broken femurs and pelvis.”

While the surgeons thought his fractures would heal on their own without intervention, Rupert did need management of his other conditions. He received a blood transfusion to treat the anemia, which was likely due to a combination of traumatic bleeding and the flea infestation. His URI was treated with antibiotics and antiviral medications.

Following OKP’s care and Dr. Vernau’s initial fostering, Saunders took over the fostering duties – without the intention to adopt.

“I had never fostered before because I knew that I’d be a sucker for them,” said Saunders. “I thought I could do it this time, but, oh no. Exactly what I thought would happen, did – we fell in love with him, and now he’s ours forever.”

A month later, Rupert returned to the Access To Care Program to be neutered by the Community Surgery Service, where students learn basic procedures commonly seen in veterinary practice like spays/neuters, mass removal, and amputations. Rupert was also microchipped, vaccinated, and had recheck radiographs performed.

Now, two months after rescuing Rupert, Saunders reports that he is healthy and happy. Weighing only 1.2 pounds when he was found, Rupert now weighs 5.7 pounds.

“It’s pretty amazing to see the transformation (into what he is now),” said Saunders. “I would’ve never guessed an animal that looked like that (when we found him) could now look like he does.”

Learn more about the Access To Care Program and how you can help underserved animals in our community get the care they deserve.