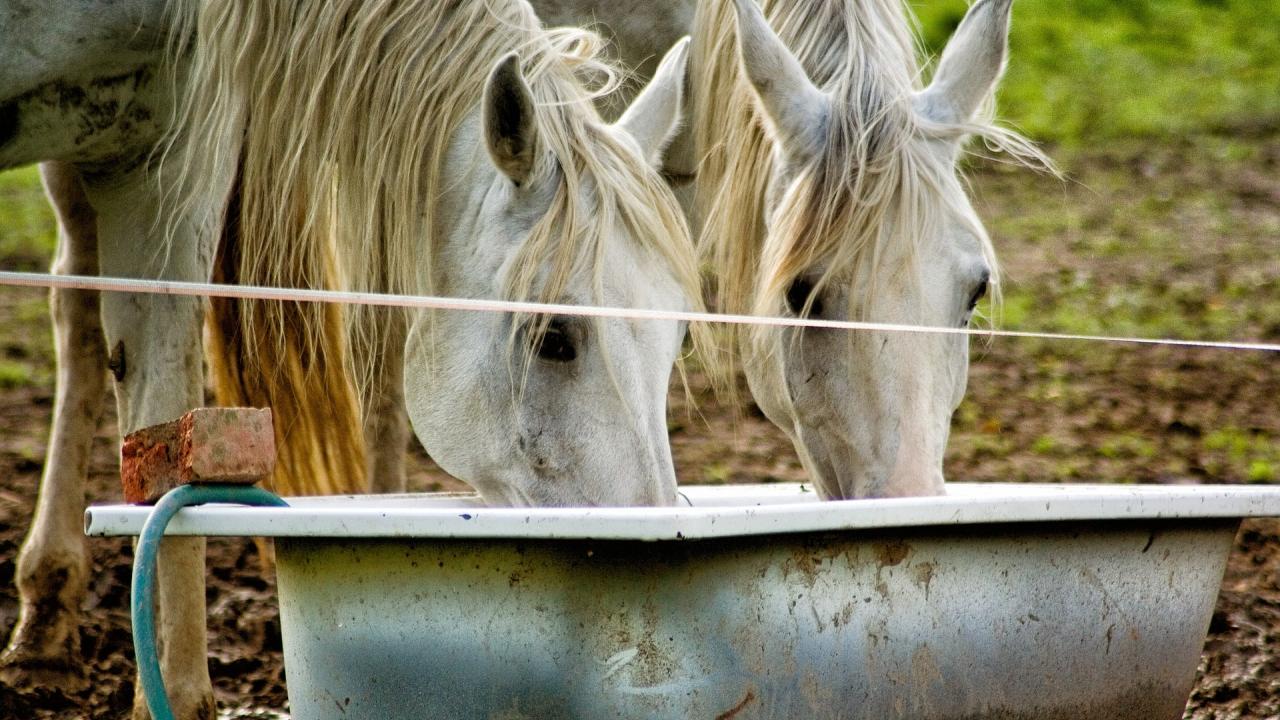 Any time a large group of horses gather in one place, there is a chance for a viral outbreak. Even seemingly healthy horses can become stressed by the situation and shed whatever virus they may be harboring. One in particular that has affected a multitude of shows and facilities in the past decade is a neurological strain of equine herpesvirus-1 (EHV-1) known as equine herpes myeloencephalopathy (EHM).

While the most common form of EHV-1 can cause respiratory illness as well as abortion, it is rarely fatal. The EHM strain, however, has a high mortality rate – generally 30-50 percent of infected horses will die.

Prior to 2011, EHM was only a monitored condition by the state of California, meaning the California Department of Food & Agriculture (CDFA) had limited authority to impose quarantine and movement restrictions. Due to an increase in cases, EHM has become a regulatory condition, giving CDFA and other state entities a more prominent role in preventing the spread of the virus.

Importance of Biosecurity
When outbreaks happen, there is always a focus on implementing the correct biosecurity measures to contain the virus at shows, in communities where the horses have returned, and at hospitals where infected horses are treated.

“The impact we can have as veterinarians is not in the prevention, it’s in the outcome,” said Dr. Nicola Pusterla, an internal medicine specialist at the UC Davis veterinary hospital. “Can we get to these horses before the spread is too extensive? And at the clinic, can we recognize, isolate, and treat infected horses before the virus spreads?”

Pusterla also emphasizes the importance of every hospital or equine facility to have a dedicated biosecurity officer who is continually looking to stay on top of the situation and maintain strict biosecurity measures.

“At UC Davis, we focus on biosecurity every day, with every horse, no matter the circumstance,” Pusterla said.

In 2011, an EHV-1/EHM outbreak at the Western National Cutting Horse Event in Ogden, Utah potentially exposed the virus to at least 2,106 horses at 242 equine facilities in 19 states (including California) and one Canadian province, and forced the cancellation of horse shows from coast to coast. By the time the outbreak eased, 90 horses were infected with EHV-1 (57) or EHM (33), with another 72 suspected cases (EHV-1: 62, EHM: 10). Thirteen of the 33 EHM-infected horses died.

While there hasn’t been another incident as large as Ogden since, scores of smaller outbreaks continue to occur across the country. In the first two months of 2018, confirmed cases have been reported at large equine facilities in 11 states, including California. A 10-year-old pony at Los Alamitos Race Course in Southern California displaying severe neurologic signs was euthanized. A necropsy at UC Davis’ California Animal Health & Food Safety Laboratory System confirmed EHM. CDFA and the California Horse Racing Board staff were quickly onsite to ensure the implementation of biosecurity measures and monitor the situation. CDFA immediately issued a quarantine for 11 other exposed horses at the facility.

“This is a great example of the importance of our regulatory condition of EHM, and of our collaboration with other state entities, like the UC Davis School of Veterinary Medicine,” said Dr. Katie Flynn, CDFA equine staff veterinarian.

In light of these events, CDFA published “EHM Incident Guidelines for State Animal Health Officials” and a “Biosecurity Toolkit for Equine Events,” as well as an EHV-1/EHM informational website. The Equine Disease Communication Center established a national database website with timely information on every EHM outbreak.

A retrospective study of the Ogden outbreak showed that horses were 3.3 times more likely to contract EHM if they were vaccinated against EHV-1 within five weeks of the event. (While there is a vaccination for EHV-1 to be used as an aid in disease prevention when it comes to respiratory issues and abortion, no commercial vaccine has a claim for the prevention of EHM; no consensus has been reached on the efficacy of EHV-1 vaccines.) The odds grew by 1.9 times with each vaccination in the year before. The research also showed that female horses were 2.8 times more likely than males to contract EHM.

CEH has contributed significantly to additional research projects into EHM, many performed by Pusterla and other faculty. An improved understanding of EHM has emerged from data collected during outbreaks at riding schools, racetracks and veterinary hospitals throughout North America and Europe.

Advanced laboratory testing at the school to confirm EHM not only assists with the treatment of hospitalized horses, but it also plays a significant role in a national biosurveillance research. An ongoing project between Pusterla and Merck Animal Health is studying the prevalence and epidemiology of relevant viral and bacterial respiratory pathogens. Since 2008, the school’s PCR Laboratory has tested more than 6,300 samples from a wide variety of febrile horses showing signs of respiratory illness and/or neurological disease. The data mined from this research helps veterinarians and horse owners determine best biosecurity practices in clinics and equine events.

Managing EHM Cases
In 2011, BSR Cat, an 8-year-old American Quarter Horse gelding, became infected with EHV-1 and developed EHM during the Ogden outbreak. Shortly after leaving the show, he experienced an acute onset of neurological deficits and was transported to the UC Davis veterinary hospital. Upon admission, a test of his nasal swab and blood confirmed the diagnosis of EHM. BSR Cat was immediately placed in the hospital’s Isolation Unit, a facility on the hospital grounds separated from the barns.

“Any horse that we suspect has EHM immediately goes to isolation – we don’t take any chances,” said Pusterla.

Every stall in the facility is an independent unit with its own air circulation to avoid cross contamination between the isolated horses.

“Putting the horses in isolation isn’t enough,” continued Pusterla. “Further precautions must be taken to ensure the virus isn’t spread by the caretakers or because of the environment. If you swab a person who just treated an EHM horse, the virus is on their attire. So we take extreme precaution in making sure that anyone who comes in contact with an EHM horse has completely changed out of their clothes and cleaned thoroughly.”

BSR Cat remained hospitalized for 46 days. Due to his inability to control his hind limbs, he was placed in a sling to help him stand. During the stay, his condition improved significantly, and he was ultimately able to lie down and get back up without any difficulty. Now seven years later, BSR Cat is in good health, but has not returned to competition.

UC Davis treated five horses from the Ogden outbreak and two other EHM cases that year. Two of those seven patients did not survive.