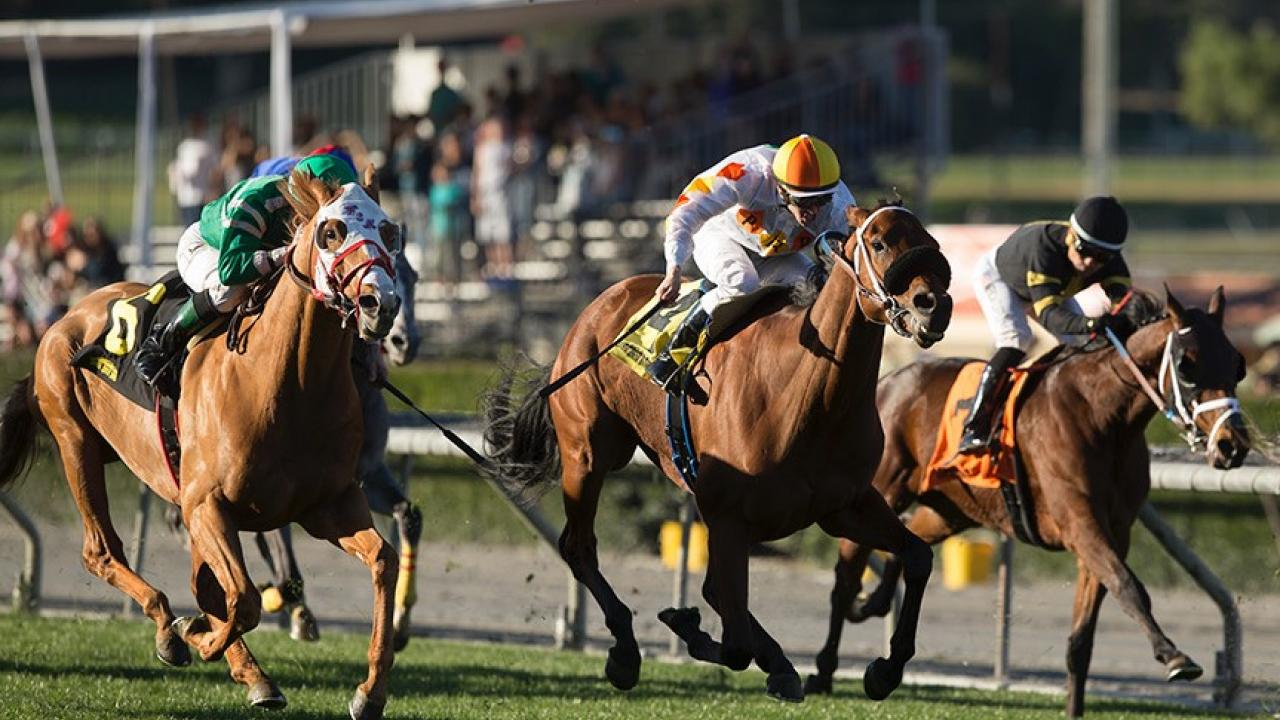 Thanks to UC Davis equine specialists in surgery and ophthalmology, Camino Del Paraiso is back to his winning ways after what could have been a career-ending injury. 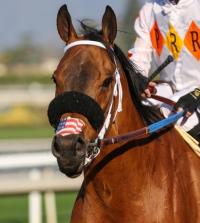 Camino Del Paraiso, an 8-year-old Thoroughbred gelding, has never been one to enjoy visits to the farrier. On his way to a shoeing early in the year, the champion racehorse was spooked when being led to the farrier shop at his Golden Gate Fields stable. He smashed his head into a barn wall and took a severe fall. His handlers could see damage to his left eye and called for the onsite veterinarian, who informed them that if they wanted to save the eye, they needed to get to the UC Davis veterinary hospital immediately. Camino Del Paraiso’s trainer called owner Herb Moniz, who didn’t hesitate for a second and sent him to UC Davis.

Specialists from the Equine Surgical Emergency and Equine Ophthalmology services at UC Davis’ Large Animal Clinic observed an anxious horse with abrasions to the left side of his head, with swelling and involuntary muscle spasms surrounding the eye orbit. His third eyelid was prolapsed, and the globe of the left eye could not be located within the orbit. A brief ultrasound was performed which showed a displaced, but intact globe with normal lens position.

The Diagnostic Imaging Service was brought in to get a better diagnosis of the situation. X-rays highlighted the extent of the damage – a complete orbital fracture, but further evaluation would be needed to fully characterize the fracture and the integrity of the eye prior to surgery. So, a CT scan was ordered to get the best details of the injury. There were multiple fracture fragments associated with the orbit causing the globe itself to be pushed inward.

“In many instances like this injury, the eye is removed, and the socket sewn closed,” said Dr. Bridget Nottle, an equine surgery resident, commenting on the severity of the injury. “Camino Del Paraiso is fortunate to have an owner who would go to such lengths to save the eye.”

Based on the location of the fracture and the degree of fragmentation, the surgeons wanted to try to manipulate the fragments back to a normal orientation to allow the globe to return to a more normal position in the orbit under general anesthesia. Working with the ophthalmology team, equine surgeons repaired the fracture and repositioned the eye and muscles surrounding the orbital socket. Following surgery, the globe was noted to be within a more normal position, however, there was residual swelling surrounding the eye as a result of the initial trauma. 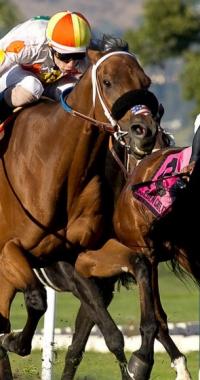 Camino Del Paraiso responded well to surgery and improved every day. By the third day of recovery, ophthalmologists were finally able to examine the eye fully. Camino Del Paraiso could follow motion with the repaired eye, clearly showing the eye to still be visible. A recheck ophthalmology examination was performed two days later which revealed continued improvement in the swelling around the eye and the third eyelid.

In total, Camino Del Paraiso was hospitalized at UC Davis for one week. After discharge, he remained on stall rest for six weeks with only brief hand walks daily. Additional rehabilitation at a layup facility was necessary to recover from the severe body soreness from the fall, but Camino Del Paraiso was back to training in five months.

On September 6, almost exactly eight months after the accident, Camino Del Paraiso won the Rolling Green Stakes at Golden Gate Fields in his first race back.

UC Davis is in the midst of expanding its veterinary services on campus, as it transforms the hospital into the future Veterinary Medical Center. The VMC will feature the Equine Performance and Rehabilitation Center where more sport horses and racehorses like Camino Del Paraiso will receive expert care by a multitude of board-certified equine specialists, including those in sports medicine. The facility's exciting design includes state-of-the-art equipment not available in many veterinary settings and opens a new avenue to improved performance through the application of clinical research.