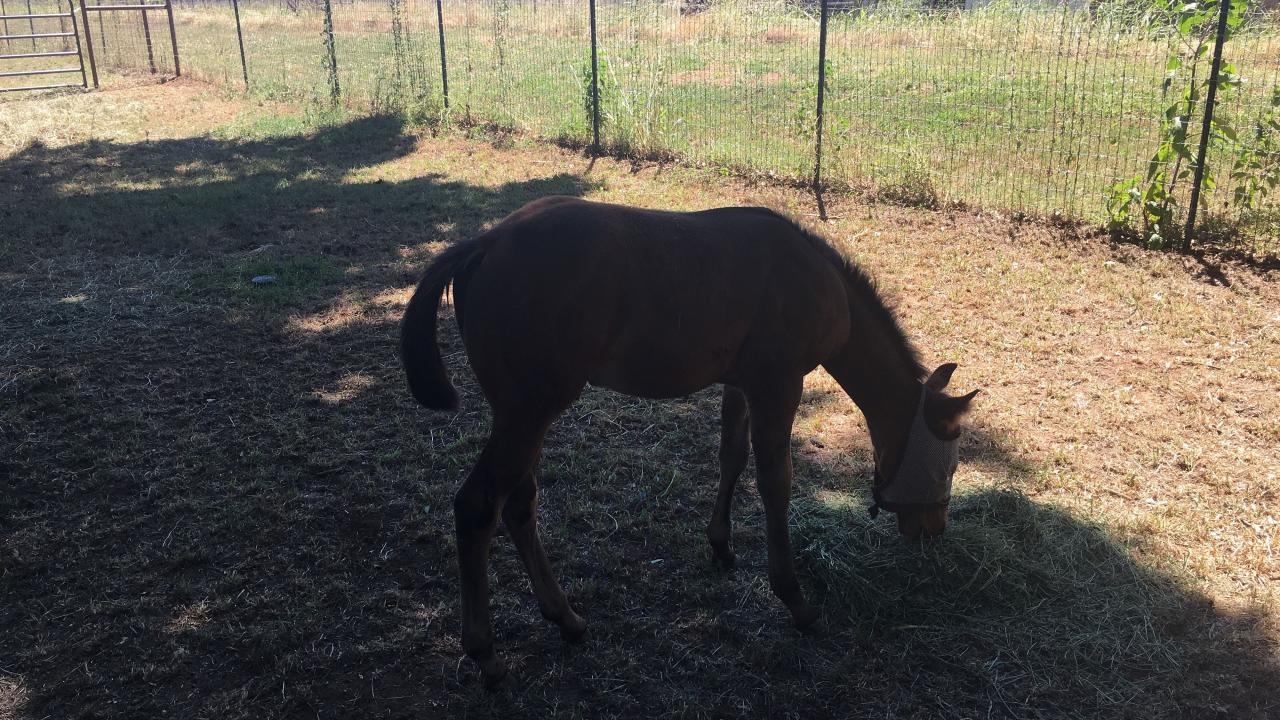 Brave, a newborn male foal, was born five weeks premature and immediately brought to the UC Davis veterinary hospital with his dam, Ally, who was also experiencing a life threatening condition with uterine artery bleeding. Upon arrival, the colt was lethargic with diarrhea and mild colic. They were received by the Equine Internal Medicine and Equine Medical Emergency, Critical Care and Neonatology Services. The team, led by faculty member Dr. Gary Magdesian and residents Drs. Rana Bozorgmanesh and Fiona Wensley, focused on the foal, while Dr. Krista Estell and resident Dr. Fauna Smith focused on the mare. A number of staff and students joined the care team to help in this critical situation. An initial physical exam in the Lucy Whittier Neonatal Intensive Care Unit (NICU) found signs consistent with a premature foal, pneumonia, and sepsis. Bloodwork was performed promptly, and showed that the colt had decreased protein and globulin counts, specifically a low Immunoglobulin G (antibody), indicating he didn’t receive enough colostrum, which left him vulnerable to infection.

Brave remained in the NICU for further monitoring, diagnostics and intensive treatment. An IV catheter was placed to help facilitate fluid therapy along with other medications (antibiotics and gastroprotectants) being administered. He was provided parenteral nutrition along with other supportive medications to help stabilize him. Brave was also administered a plasma transfusion, in order to give him the necessary immunoglobulins he didn’t receive from his dam’s colostrum.

Ultrasound examinations revealed a pulmonary infection with small areas of aspiration pneumonia being visualized, as well as a large bladder that required placement of a urinary catheter to prevent rupture. Radiographs (x-rays) confirmed the premature status of the colt by showing that the cuboidal bones within the carpus and tarsus (knees and hocks) were not fully ossified (had not yet turned into bony tissue). Because of this, Brave had his own personal foal sitters and technicians in order to prevent him from standing excessively and crushing these soft, cartilaginous bones. He had assisted standing and a physiotherapy program developed by Dr. Magdesian to keep the bones from being crushed while still allowing for strengthening of the limbs and muscles. This condition required Brave to remain hospitalized for many weeks until his bones strengthened. In addition, in order to prevent limb contracture, the team performed passive range of motion exercises several times per day.

During Brave’s extensive hospitalization, the equine care team dealt with many health issues, according to Dr. Magdesian, chief of the Equine Internal Medicine Service and the holder of the Roberta A. and Carla Henry Endowed Chair in emergency medicine and critical care. The colt experienced many problems common to such premature foals, including recurrent diarrhea, hypothermia, hypoproteinemia, and poor tolerance of milk feeding.

Premature foals have difficulty transitioning to extrauterine life, meaning they are physiologically not always ready to thrive outside of the mare’s uterus. Their immune system is immature, and they often don’t ingest enough colostrum. This puts them at high risk of developing sepsis, or blood stream infection. They often require plasma transfusions to ensure adequate immune function, as well as antibiotics to prevent sepsis. The foals can have reduced breathing efficiency, and may require oxygen supplementation or respiratory stimulation. They may be intolerant of milk feeding and require parenteral nutrition (IV protein and carbohydrates) while their gastrointestinal tract adjusts to milk, as well as require enzymes to help with digestion (lactase enzyme). They may be unable to urinate, and require bladder catheterization. Their eyes can develop corneal ulcers and require close monitoring, sutures or staples if they have entropion (a common problem of premature foals where the eyelids turn in), along with eye lubricant. Like in Brave’s case, they can have leg issues as well. In short, they often require intensive care, with patience while their bodies adjust to life outside of the mare’s uterus.

Radiographs were performed weekly to track Brave’s bone ossification. After five weeks in the NICU, Brave progressed to complete ossification. Following a few more days of increasingly good health, he was ready to be discharged. After being hospitalized for 43 days, Brave was finally able to go home. In addition, his dam Ally resolved her uterine artery bleeding and also went home healthy.

Brave’s care would not have been possible without the dedicated team of faculty and resident veterinarians, technicians and students who participated in his care, as well as a dedicated owner who never gave up on him. Very few hospitals are equipped and staffed like UC Davis, with the ability to care for all of the issues that arose during Brave’s hospitalization. The hospital’s board-certified specialists are at the forefront of neonatal care, and cases like Brave’s allow them the opportunity to train their residents and students in the care of these critical cases. Being able to facilitate all of Brave’s care under one roof is a unique quality of the UC Davis NICU, and a distinct benefit for horse owners in California.