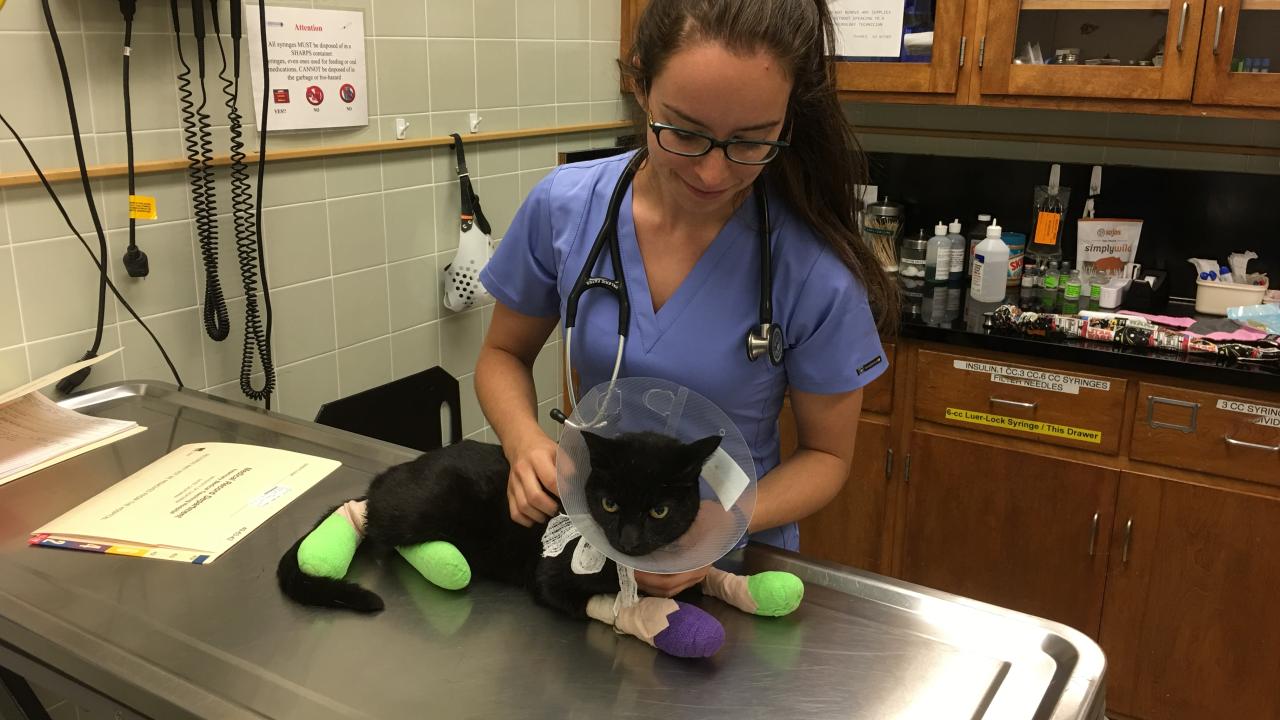 Cats Injured in Wildfires at Risk of Deadly Blood Clots

Cats who suffered burns and smoke inhalation in urban California wildfires are at risk of forming deadly blood clots, according to a new study from researchers at the University of California, Davis, Veterinary Medical Teaching Hospital. The study, recently published in the journal Frontiers in Veterinary Science, follows up on a previous discovery that showed cats injured in urban wildfires had a high incidence of heart problems.

“Prior to these two papers, we didn’t realize that cats impacted by urban wildfires were prone to forming clots, which can lead to sudden death,” said lead co-author Ronald Li, associate professor of small animal emergency and critical care at UC Davis. “This study will change the standard of care for rescued cats from these wildfires and hopefully save more lives.”

Cats treated for their injuries from the 2018 Camp Fire in Paradise, California, were some of the models for this study. Researchers examined their platelets, the cells that circulate in blood and help stop bleeding or form blood clots. They found that cats with wildfire injuries had increased overactive platelets compared to healthy cats or cats with heart disease, in this case subclinical hypertrophic cardiomyopathy, or HCM. HCM is the most common cardiac disease in cats and causes a thickening of the heart muscle.

“Cats with HCM are hypercoagulable, meaning they are more likely to form clots,” explained lead co-author Ava Tan, a veterinary research fellow currently working in Li’s laboratory. “That’s why we used them as a control group to compare with cats in the wildfire group.”

The platelets of wildfire-injured cats also released high amounts of microvesicles, microscopic membranous bubble-like structures filled with proteins, which are associated with cardiovascular disease and an elevated risk of clotting.

“We found cats exposed to wildfire smoke and injuries are even more prone to throwing clots, showing a direct association between wildfire injuries, platelet response and clot formation,” Tan said.

In addition to clot formation, platelets have a lot to do with overall cardiovascular health and disease. The study also led to the discovery of a novel receptor on cat platelets, Toll-Like-Receptor-4, that may play a role in clotting and could be the target for treatments developed in the future.

“These results could lead to bigger health implications for our feline patients and highlight the important role that platelets play in linking inflammation with the coagulation system,” Li said.

Wildfires pose a major risk for humans as well. Emergency room visits increase due to heart attack and strokes after wildlife exposure. Although the underlying mechanism isn’t known in humans, this study in cats may shed light on systemic platelet activation, which plays a crucial role in mediating the likelihood of developing clots as a result of wildfire injuries.

“This study opens a new door to looking at how wildfires impact cardiovascular health in humans,” Li said.

The researchers were able to use blood samples collected from cats brought in for treatment from the Camp Fire, which have been used in these two studies to date. This study has also led to a third study, which is underway, to discover new cellular processes that may explain why feline platelets are so sensitive and prone to clotting, especially in cats with heart conditions or wildfire injuries. The data collected is critical to developing early treatment plans, Li said.