“Disaster medicine is helping one animal at a time.” — Dr. John Madigan

Sometimes you can smell trouble before you see it. Acrid smoke from the Camp Fire 90 miles north was the first indication of what was coming—or rather who. Animals who survived by running through flames, singing coats, hair, hooves, pads, manes and tails. Those who pulled smoke into their lungs, nasal cavities, throats and eyes, burning eyelashes and eyelids—faces swollen by burns.

As news about the scope of the wildfire near Paradise, CA, started pouring in, disaster response teams at the UC Davis School of Veterinary Medicine launched into action. While the veterinary hospital prepared to accept and treat dozens of expected animals brought in for care, the Veterinary Emergency Response Team (VERT) readied to assist first responders in the field.

Helping Animals—One at a Time

One of the first to arrive was Feather, the goat. By the time rescuers were able to deliver her to the Large Animal Clinic late on a Sunday night, her face and eyes were so swollen that she couldn’t see. Dr. Munashe Chigerwe and her owner, Jim Clark, gently urged her from a corner of the trailer and onto a cart to be taken into the barn. She stayed for the next 19 days, receiving intensive care. Clark credits Feather for saving the other 17 goats in his herd and leading them to safety, while suffering the brunt of the injuries. She’s not just a goat, but a member of the family, Clark said.

“She walked to the mailbox with me most days. We don’t have a house or mailbox any more, but we still have our girl.”

Over the course of the next two weeks, rescue organizations, other veterinary clinics, private owners and VERT brought nearly 70 animals to UC Davis for treatment. Patients included dozens of cats, goats, pigs, a donkey, a llama, several horses, a mini horse, an ewe, chickens, a goose, ducks, goldfish, koi, a tortoise and even a bobcat. (These numbers don’t include an additional couple dozen fancy goldfish and a few koi. These were brought to the Center for Aquatic Biology and Aquaculture, within the College of Agriculture and Environmental Sciences, for safekeeping after their owners’ home burned to the ground.)

Injuries included smoke inhalation, dehydration and mild to severe burns on ear tips, faces and feet. Depending on the nature of the wounds, in addition to immediate pain medication, veterinary teams gave the animals fluids, antibiotics and oxygen. Additionally, some animals presented with burns in their nasal cavities and mouths, requiring feeding tubes because they didn’t want to eat.

“First-degree burns might take only a few days to heal, while more severe burns require weeks to months of care,” said Dr. Steven Epstein, chief of the Emergency and Critical Care Service for the Small Animal Clinic at the UC Davis veterinary hospital. “A lot of the foot pad injuries we treat in the cats can take two to three weeks to heal.”

Unfortunately, wildfires in California that move into urban areas, affecting companion animals and livestock, have become more common in recent years. When fires hit Napa and Sonoma Counties little more than a year ago, the UC Davis veterinary hospital was able to mobilize quickly due to previous experience with the Valley and Butte fires of 2015. They did the same in response to the Camp Fire. Treatment teams are comprised of faculty clinicians, residents, veterinary technicians and students. 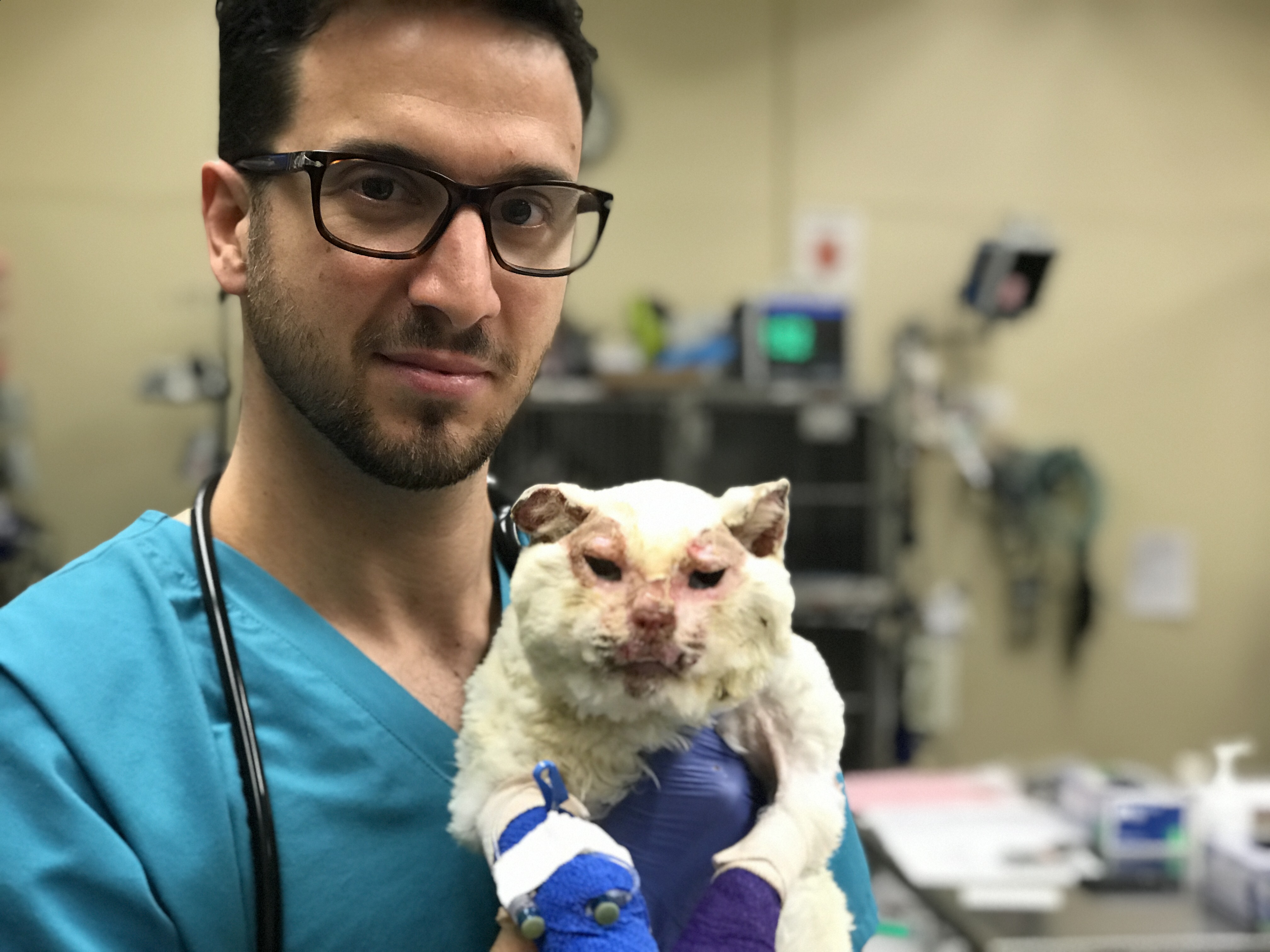 Within a few days, 33 cats were admitted to the hospital for care. All of them required physical examinations and immediate care of their injuries, which ranged from mild to severe. Then came the weeks of bandage changes (which is still going on for multiple cats), feeding, cleaning cages, changing litter boxes, and spending time with them to ensure their quality of life is as good as we can make it. It takes an emotional and physical toll on the team over time.

As stories of animals being treated at UC Davis began spreading through the news and social media, people far and wide reached out to help by donating to the Veterinary Catastrophic Need Fund to cover the costs of medical care and treatment. Thanks to the generosity of donors, owners who had lost everything in the fire were relieved of the financial stress of treating their beloved pets.

Treating Animals in the Field

While the hospital’s veterinary teams cared for patients in the Small and Large Animal Clinics, VERT responded to a call from California’s Office of Emergency Services to deploy to the Butte County Fairgrounds at the large animal evacuation center. While the Camp Fire still raged, filling skies with dark smoke and covering the area with ash, VERT teams led by Dr. John Madigan evaluated and treated hundreds of animals at the fairgrounds over two weeks for flight-related injuries—including stress, dehydration and burns. Many were able to be treated on site while the most serious cases were brought back to the UC Davis veterinary hospital. Animals treated at the fairgrounds included horses, donkeys, goats, sheep, chickens, turkeys, geese, alpaca, pigs, and dogs.

“Working in smoky conditions with a face mask wasn’t easy and the days were long and grueling,” said Hayley Dieckmann, a third-year student who serves as president for the Students of Veterinary Emergency Response Team (sVERT). “But I truly believe that we all gained a tremendous amount from this experience, from the sheer number and diversity of medical issues, to the compassion and connection we felt with our community who lost so much in the Butte county fires. We had the distinct opportunity to help where help was desperately needed, and left with a feeling of great accomplishment at having improved the health of an animal, and therefore their human, during this difficult time.”

That’s exactly the message that Madigan instills in the students and other volunteers who deploy with VERT. 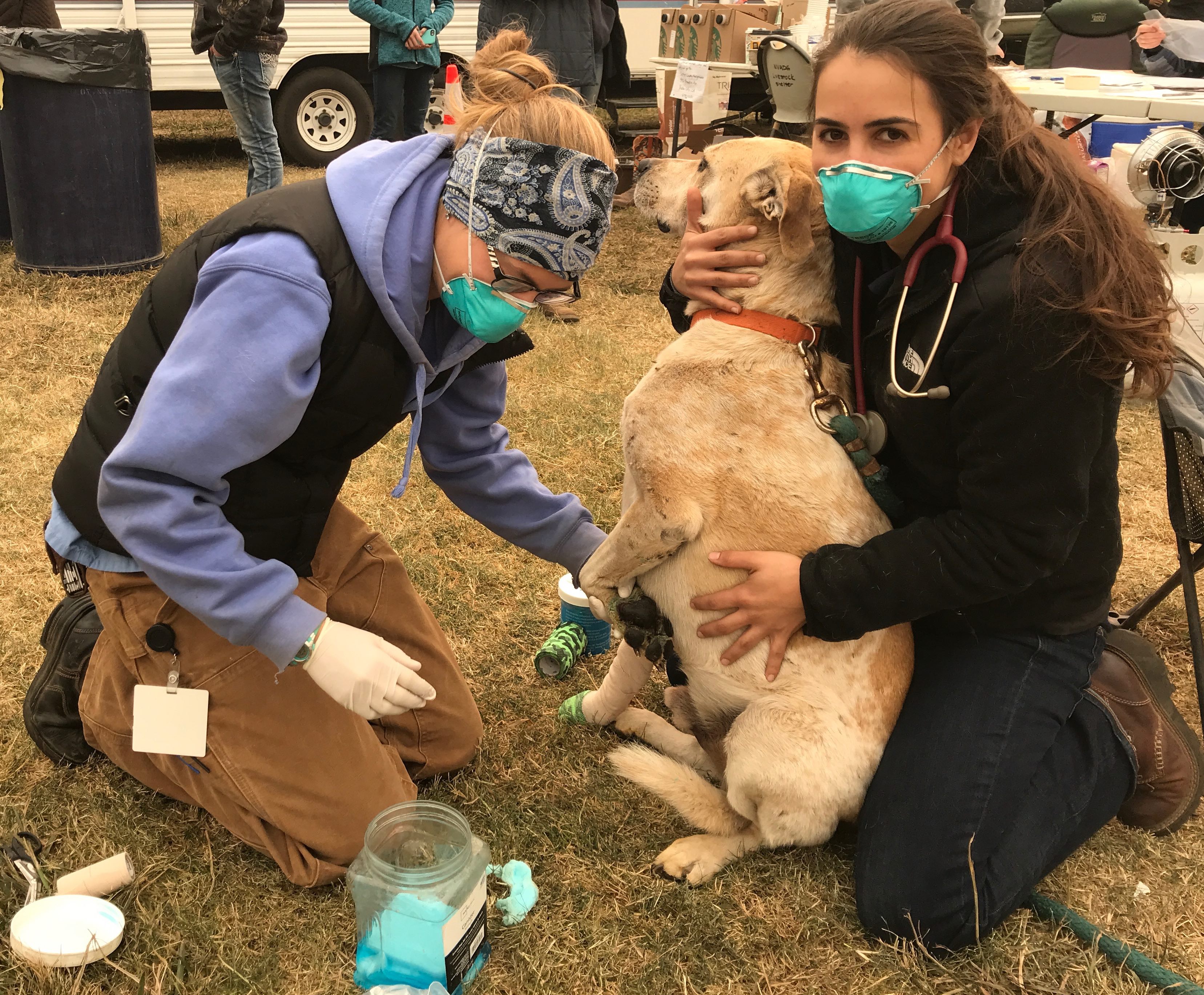 VERT continued to deploy for 12 days in a row, through the Veteran’s Day weekend, the UC Davis campus closure due to poor air quality, and the Thanksgiving holiday weekend. A second VERT team was sent to the Red Cross shelter for people and pets, located at the same fairgrounds.

In addition to the call to report to the Butte County fairgrounds, Madigan also led teams into the burned areas once they were cleared for safety to perform welfare checks and deliver food and water to animals sheltering in place. The team’s efforts at the fairgrounds and in the field were supported by generous donors to a specific VERT fund that helps cover transportation, medications, supplies, and mobile veterinary care.

The crisis isn’t over. VERT received a second urgent request on December 6th for redeployment to the Del Oro animal shelter in Butte County that is currently housing 225 cats, 61 dogs, one duck, 40 chickens, two exotic birds, and two rabbits. Over that weekend, a VERT team of faculty and students responded to the call–just before finals week.

“The animals are being held in one location now to facilitate reunification,” Madigan said. “But the challenges of a temporary shelter becoming long-term are evident. Even troops from the National Guard were helping out, including walking dogs to give them some exercise and fresh air. Everyone is doing their best and exploring new approaches that may be needed to improve animal welfare.”

VERT is now helping to implement a Butte County Animal Passport system for long-term tracking and unification for animals that may need to be housed in adjacent counties. The system is meant to ensure that every animal from Butte County has all the protections and chances for rehoming or adoption as if they were right there at the shelter and allows the longer term sheltering care to be provided with fresh helpers and larger spaces for the animals.

“We couldn’t do this work without the generous people who support our efforts in the field,” Madigan said. “The animals may not be able to say it in words, but thank you.”

For many of the cats admitted to the veterinary hospital, surviving the Camp Fire was one challenge, being reunited with their families was another. Only three cats had microchips with current owner contact information that immediately enabled identification. A few other cats had older microchips with outdated information or chips that didn’t immediately show up when the animal was scanned. 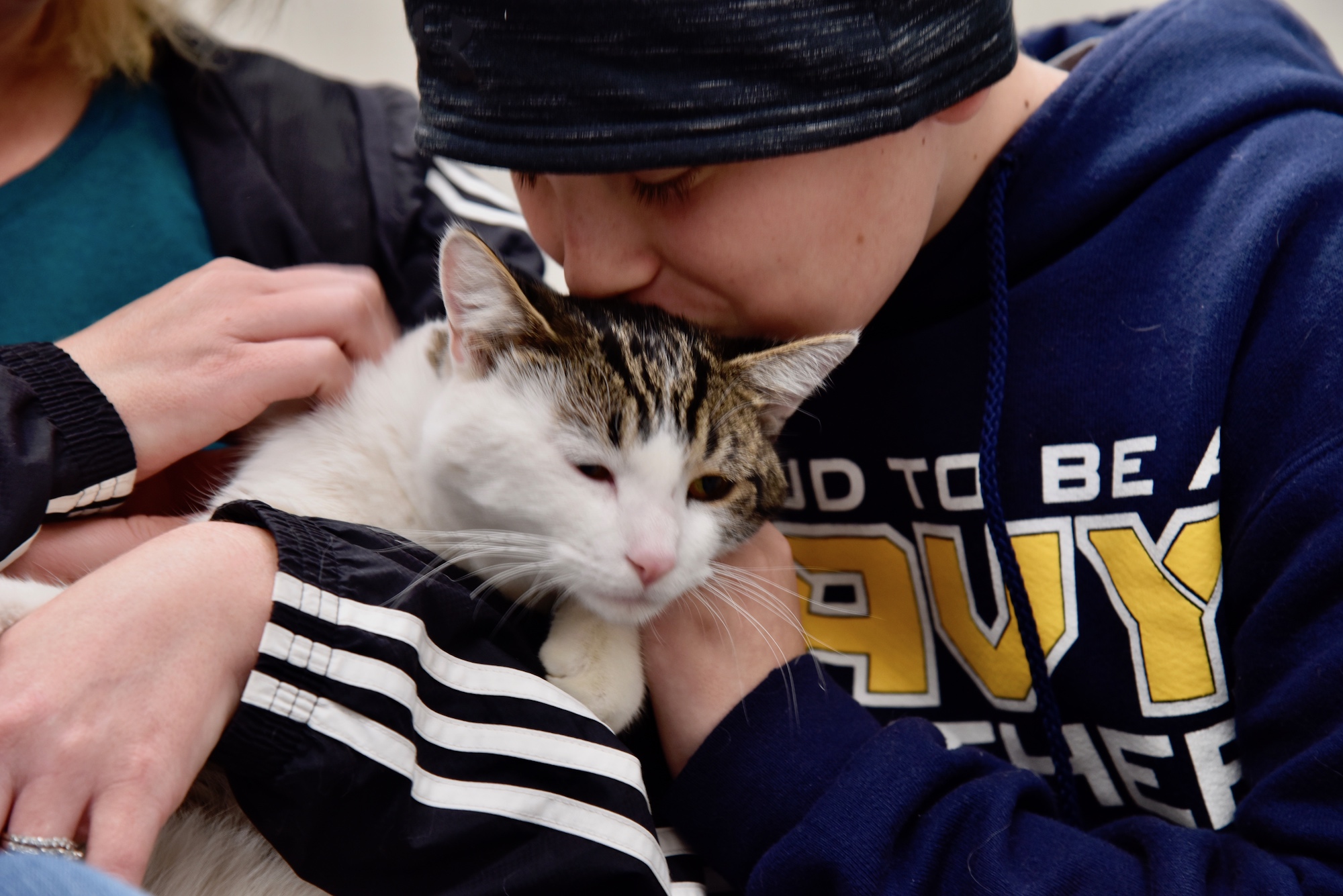 That’s where the power of social media came in to play. Once we posted a Facebook album of unclaimed cats, the response was overwhelming from people desperate to find their lost pets. The album was shared more than 131,700 times and garnered attention from The Washington Post, Yahoo, Buzz Feed News, Huffington Post, local television stations and other news outlets. The viral images helped reunite another 12 cats with their people. Photos and videos of subsequent reunions went viral as well.

Some cats healed well enough to be discharged back to Butte County, while there are still a handful of cats continuing to recover at the small animal clinic.

As for Feather, after 19 days in the hospital, she was eager for freedom. She rode off in the back of a Honda Fit on a sunny afternoon to continue healing at Lucky Ones Ranch, a local animal sanctuary. Her burns continue to heal with the help of a manuka honey mixture that contains betadine, eye ointment and Vaseline.

“Feather is doing much better thanks to everyone at UC Davis,” Clark said. “They took such good care of her. Her eyesight improves daily, she’s healing, becoming more herself, and getting an appetite back. She’s going to be ok.”