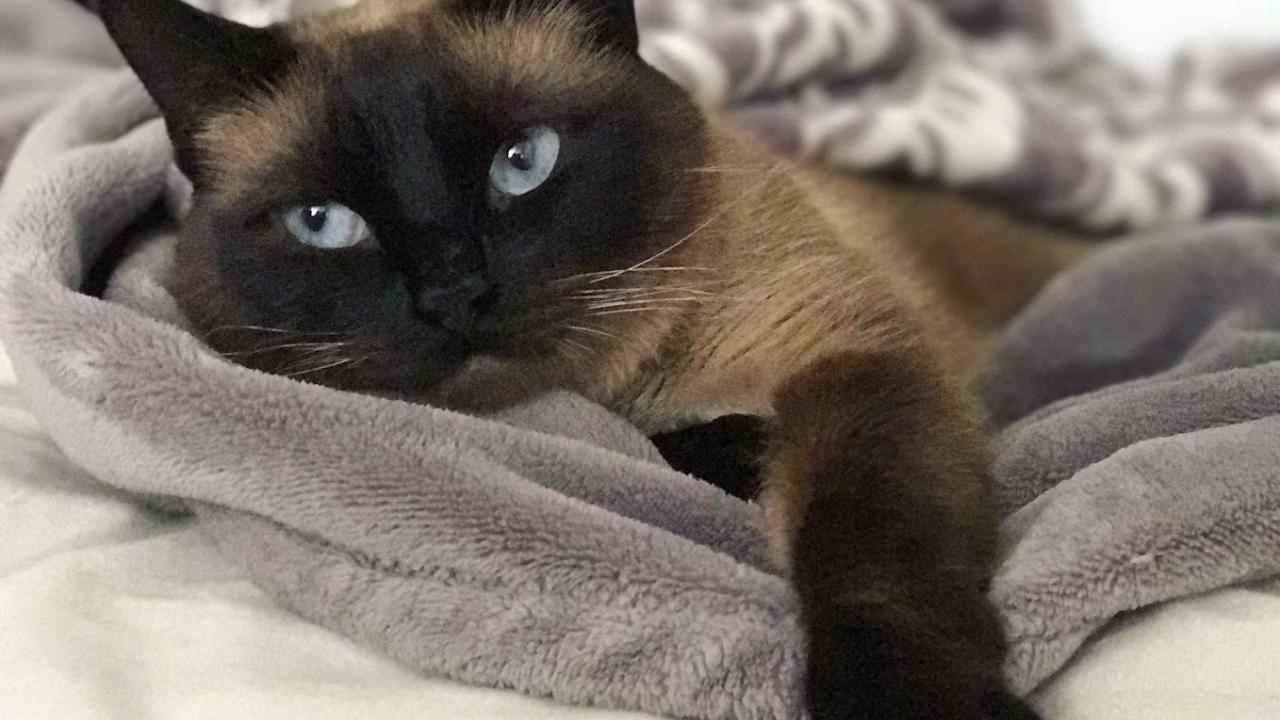 Stormie, a 4-year-old female Siamese cat, has had a history of heartworm disease since she was adopted at 1 year of age. She and her owner live in Los Angeles, but were visiting family in the Bay Area when she developed pelvic limb lameness. Fearing she had fallen off something or down a staircase, Stormie’s owner brought her to a local veterinary emergency room in Berkeley, where she informed them of the history of heartworm disease. After ultrasound showed a suspected heartworm in the arterial system, and a heartworm antigen test resulted in a strong positive, Stormie’s owner was advised to bring her to specialists at the UC Davis veterinary hospital.

Once at UC Davis, the Cardiology Service responded to Stormie’s emergency arrival, and confirmed the referring veterinarian’s diagnosis. To get a better idea of the exact location of the worm and to form a treatment plan, the cardiologists performed an echocardiogram. The imaging test revealed a heartworm in the pulmonary artery. They also saw evidence of pulmonary hypertension, or high pressure in the lungs, from the heartworm disease.

An abdominal ultrasound followed, and confirmed that the heartworm extended into her abdominal aorta and down her leg into the right femoral artery. The worm was cutting off blood supply to the right leg and needed to be addressed immediately in order to avoid amputation.

Members of the Anesthesia/Critical Patient Care and Diagnostic Imaging services placed Stormie under general anesthesia and performed a CT angiography scan. The scan did not reveal any additional heartworms, but revealed there were abnormalities in the soft tissues in the right back leg likely secondary to decreased blood flow from the worm. It also showed evidence of inflammation in the lungs, which was likely also caused by the heartworms.

Cardiologist Dr. Catherine Gunther-Harrington and Dr. Ingrid Balsa of the Soft Tissue Surgery Service, assisted by cardiology resident Dr. Maureen Oldach, collaborated to successfully remove the 13 centimeter heartworm from Stormie’s right femoral artery without breaking it. Because there was normal blood flow through the artery once the worm was removed—and the leg tissue still looked healthy—the artery was repaired, and the doctors decided that amputation was not necessary. However, Stormie’s leg may require amputation in the future if the nerves and muscle in that leg do not heal properly, which may take months.

Removal of a heartworm via the femoral artery is extremely rare in veterinary medicine. It has been reported on only a few occasions in dogs, but never in cats. Due to this uniqueness, Dr. Oldach is currently preparing a case write-up for submission to a scientific journal.

Stormie stayed hospitalized for four days so the Intensive Care Unit team could closely monitor her recovery. In addition to painkillers and anti-inflammatory medications, she was given an antibiotic that will help weaken the remaining heartworms in her system. As the worms die, they will break up into small pieces that could lodge in her lungs or other places throughout the circulatory system. In order to prevent this, she was prescribed a medication that will help break up blood clots and prevent new clots from forming. She was also placed on a monthly heartworm preventative that she will need to continue for the rest of her life.

To avoid a future amputation, Stormie’s owner has her in physical rehabilitation and is hopeful that she will continue to improve.

This procedure is a wonderful representation of the benefits of certain cases being seen at a large specialty hospital. The ability of board-certified specialists in five different disciplines to collaborate on saving animals like Stormie is nearly an everyday occurrence at UC Davis, but not something that can happen at smaller veterinary practices. The UC Davis veterinary hospital is grateful to be able to serve those referring clinics to better the health of animals throughout California and beyond, while it teaches the next generation of general practitioners and veterinary specialists.