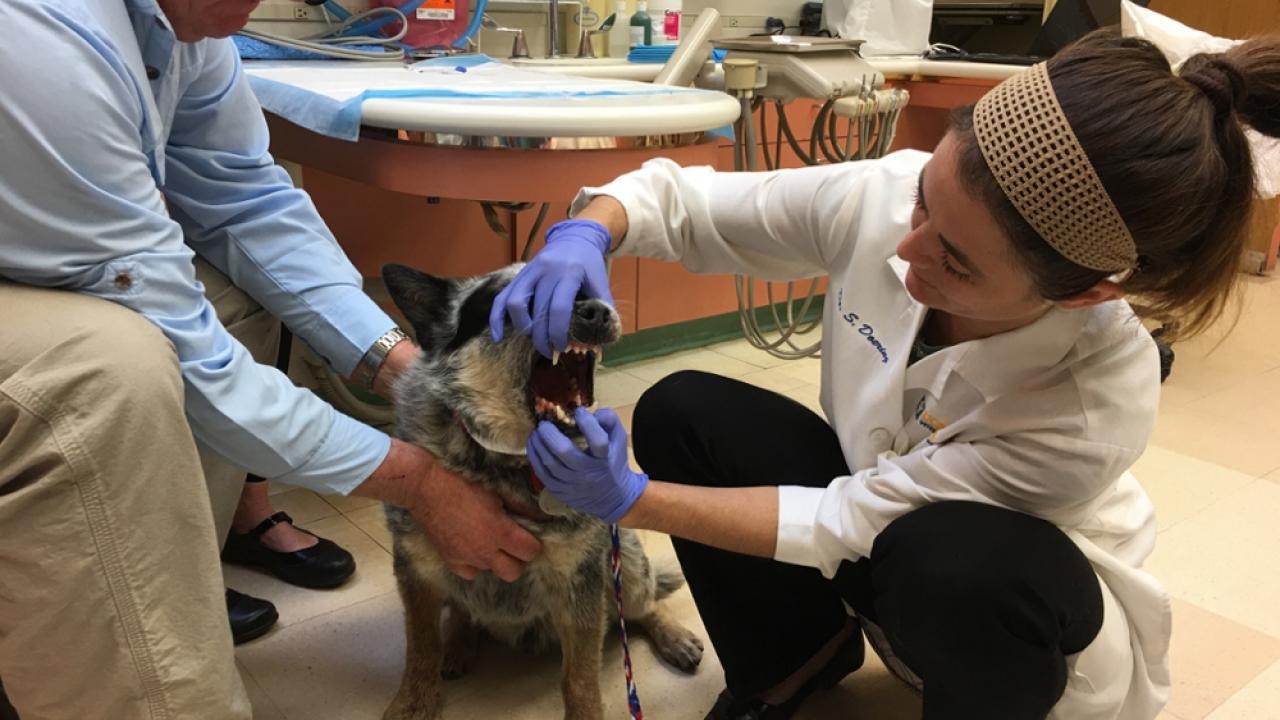 Oral Surgeons Repair Dog’s Tongue after Getting Caught in Trap

Hank lost the majority of his tongue in a trap, but UC Davis oral surgeons were able to repair the remaining portion.

Hank, a 10-year-old male Australian cattle dog, lives with his family in a rural area in the foothills of the Sierra Nevada Mountains. After roaming the property recently, he returned home bleeding profusely from the mouth, and it appeared his tongue was missing. Hank was taken to a local animal hospital where veterinarians were able to stop the bleeding and manage his shocked condition. Due to the severe nature of his wound, he was transferred to the UC Davis veterinary hospital.

Oral surgeon Dr. Boaz Arzi and resident Dr. Sophie Döring of the Dentistry and Oral Surgery Service examined Hank and found that two-thirds of his tongue had been ripped out of his mouth. His owners suspected he stuck his mouth into an animal trap that caught his tongue. He most likely then ripped it loose in order to escape.

The surgeons repaired the remaining portion of his tongue, and removed plaque and calculus from his teeth in order to decrease the overall bacterial load in his oral cavity, thus minimizing the chance of any infection.

Hank was encouraged to eat and drink by mouth as much as possible, but that wasn’t expected to be enough to meet his nutritional requirements. To supplement that, the hospital’s Nutrition Service created a diet for Hank to be fed through a feeding tube for two weeks. After 10 days, the feeding tube was removed after Hank willingly started eating by hand. As for drinking, Hank quickly realized that he could no longer lap up water with his tongue, so he improvised by just sticking his entire snout into the water bowl and consuming as much water as he could gulp.

Being a resilient dog, Hank eventually re-learned to eat on his own. He usually prefers kibble soaked in water – discovered by accident after rain spilled into his food bowl that contained kibble, and he eagerly ate it.

Six weeks following the accident, what remains of Hank’s tongue healed, and he was back to his normal self. He still enjoys wandering his property, but he’s probably a bit more cautious where he sticks his snout now.