The past two years have been difficult for Ravella, an 11-year-old Dutch Warmblood mare and dressage athlete. She battled multiple lameness-causing injuries that nearly permanently sidelined her, but because of a diligent rider/handler, a caring owner, and a dedicated veterinary team, she is on the road to recovery with a bright athletic future. And more athletes like Ravella can look forward to similar results with coming advancements to UC Davis’ treatment facilities for equine athletes.

Ravella’s history with her current team dates to 2016 when friends and dressage enthusiasts Natalya Slipchenko and Ann Jonkman were both interested in buying her in Indiana. Slipchenko was unable to afford her, but Jonkman proposed a deal where she would buy Ravella if Slipchenko would train her and compete with her. Slipchenko, an undergraduate at Purdue University at the time, immediately jumped at the opportunity.

“Ann is a wonderful person with the biggest heart when it comes to helping people and animals,” said Slipchenko. “We both instantly fell in love with Ravella as soon as we got her.”

Slipchenko and Ravella had an instant connection, achieving the highest (4th or advanced) national level of dressage, qualifying for national championships many times during their first few years together. Slipchenko’s goal is to qualify for the international level, which has three levels beyond the national standards.

“It has been such a joy to watch Natalya and Ravella grow and develop their relationship,” said Jonkman. “My goal in starting this journey was to give a girl a chance to have her own horse and to give this horse a chance to develop into something great. And that they have.”

By 2019, Slipchenko finished her bachelor's degree at Purdue and was accepted into the graduate program in the Department of Agricultural and Resource Economics at UC Davis. She was pleasantly surprised when Jonkman offered to allow her to take Ravella with her to California.

“My only intention going forward is to support these two in any way I can to keep this team happy and together,” said Jonkman. “The rider/horse relationship is often the missing piece in dressage. Natalya and Ravella have that bond, and I would never allow anything or anyone to break it.”

That autumn, Slipchenko and Ravella arrived in Davis, but by early 2020, Ravella started showing signs of lameness. 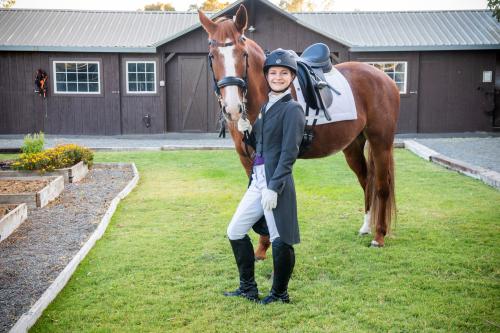 The UC Davis veterinary hospital’s Field Service localized the lameness in the left front foot by utilizing nerve blocking. There were also continuing concerns of a previous lameness injury in her right front foot. Following radiographs and a visit to the Large Animal Ultrasound Service, both of Ravella’s front coffin joints were injected with a steroid, hyaluronic acid, and an antibiotic to decrease inflammation within the joints.

When Ravella’s left front foot did not respond to the coffin joint injections and the lameness persisted for months, Dr. Sarah le Jeune of the Equine Integrative Sports Medicine Service was brought in to further assess the situation. An MRI showed a marked coffin joint injury, and Dr. le Jeune prescribed a series of Interleukin-1 Receptor Antagonist Protein (IRAP) injections, an advanced anti-inflammatory treatment for joint disease in horses. Monthly shoeing and trimming cycles with a farrier were also integrated into the therapy to help decrease the injury.

Throughout the process, Jonkman was supportive of the treatments and was willing to do whatever it took to get Ravella healthy.

“Without Ann, none of Ravella’s treatments would have been possible,” said Slipchenko. “She always said yes to any care needed, and she’s always trusted me with Ravella.”

To complement treatment for other injuries with Ravella, Dr. le Jeune implemented chiropractic and acupuncture procedures.

Recently, Ravella was declared sound and is back to competing after a nearly two-year journey to health. Ravella debuted at the Prix St. Georges (international) level this summer with great success. Slipchenko, who also coaches the UC Davis Dressage Team, says she has never felt Ravella so happy and relaxed in her work, leading to success in competition.

“I have done everything I can to make sure Ravella is continually happy, healthy, and sound,” said Slipchenko. “It was great to find a veterinarian with whom I had a good connection and a mutual trust. If I ever think anything is wrong with Ravella, Dr. le Jeune always takes me seriously and always comes to look at her. That has been huge for Ravella’s health.”

“It’s been great finding a veterinarian who understands equine athletes,” Slipchenko continued. “When we first started working with Dr. le Jeune, I asked her what I could do to make Ravella better. She suggested icing and wrapping after every workout. That has added nearly an hour to every time I ride her, but it has been absolutely worth it. Having Dr. le Jeune on our team changed Ravella’s life.” 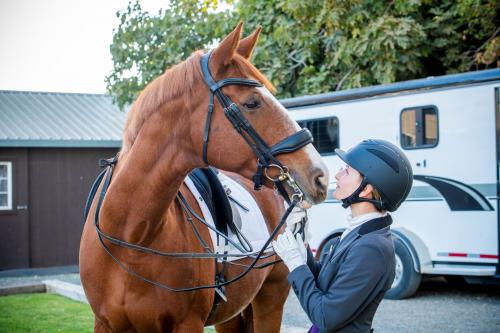 Sports medicine specialists are becoming more vital to the success of equine athletes. With Ravella’s case, Dr. le Jeune’s ability to detect and objectively assess her gait abnormalities with the latest technology made all the difference. Her leadership in sports medicine is setting the standard for the care of equine athletes at UC Davis.

As a world leader setting the pace in equine health, UC Davis looks to expand to even greater heights. In the coming years, the veterinary hospital’s Large Animal Clinic will transform into several new clinical settings with the new Veterinary Medical Center. A cornerstone of that will be the Equine Performance and Rehabilitation Center (EPRC).

With a dedicated gait analysis laboratory, integrated sports medicine center, and new arena supporting performance evaluation, the EPRC will prioritize injury prevention through targeted approaches using the latest diagnostic tools. Horses will be evaluated at their current competition level, enhancing the ability to detect minor injuries or risk factors that could affect future performance. Force-plate technology and video analysis will generate personalized data on biomechanics that will open pathways to improved performance through tailored interventions as well as research that is rapidly translated into clinical treatments.

This state-of-the-art facility will allow Dr. le Jeune and other UC Davis equine specialists to advance their practices and continue improving the lives of horses like Ravella and other sport and pleasure horses.