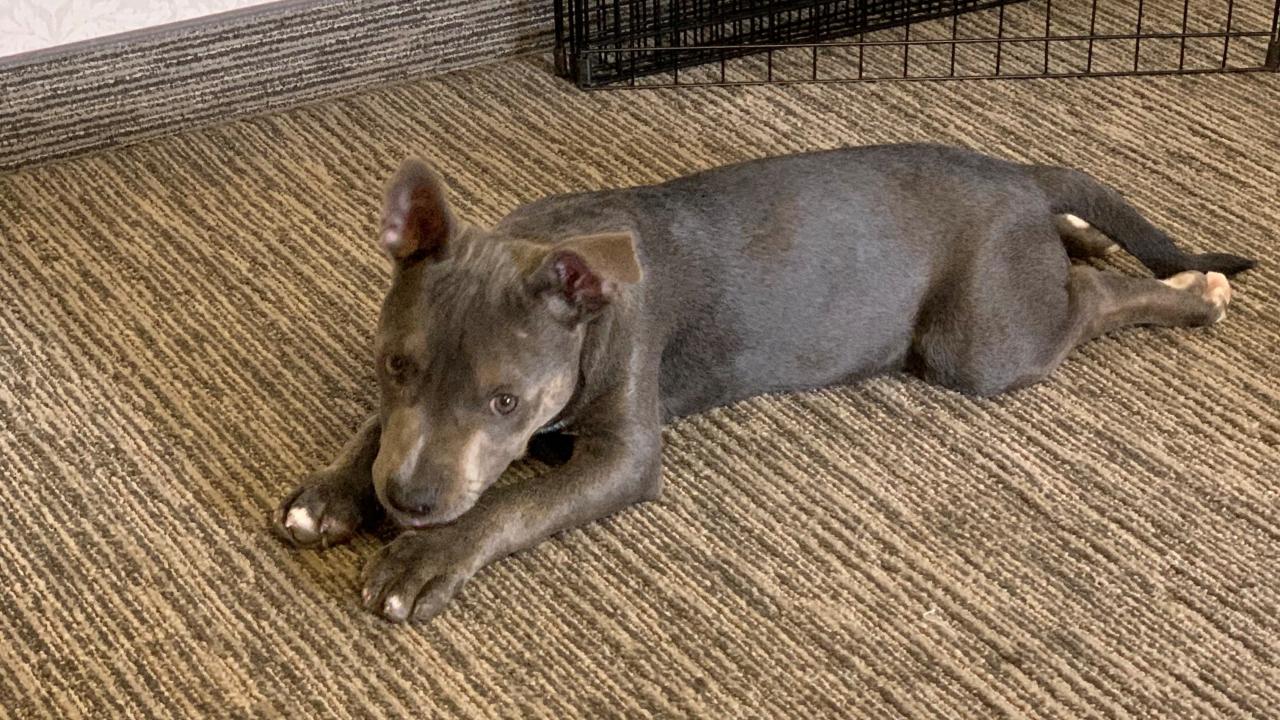 At only a month old, Ghost was surrendered to the Itsie Bitsie Rescue. The pit bull terrier mix seemed a bit clumsy compared to other puppies his age and his movements were stiff. By 2 months of age, he began to have hind end weakness and would occasionally stumble. Soon his front legs began to buckle, and his weakness worsened by the day. A general practitioner who examined Ghost felt that neurologists at the UC Davis veterinary hospital were better suited to diagnose and treat him. By the time that referral happened a few days later, Ghost was paralyzed.

At his neurological examination, Ghost had lost control of all four limbs, and he was found to have a neurological problem affecting his neck. Radiographs and then an MRI showed multiple areas of his spinal cord with abnormal bony deposition causing spinal cord compression. A CT scan allowed the neurologists to better visualize the bony changes affecting his spine. Given all this information, Ghost’s condition was thought to be a congenital anomaly called calcinosis circumscripta, a condition of unknown origin that causes calcium deposits to build up along a dog’s spine. For Ghost to walk again, the calcium buildups would need to be surgically removed in order to decompress his spine, hopefully allowing the spinal cord to function properly again.

Faculty neurosurgeon Dr. Beverly Sturges and neurology resident Dr. Adrien Dupanloup performed Ghost’s spinal surgery to remove the compressive bone in his neck and to improve his comfort. A dorsal laminectomy (partial removal of top of vertebrae) was performed at C1, and a hemidorsalaminectomy (partial removal of side of vertebrae) was performed at C2-C3 and C6-C7 to remove the bony masses that were compressing Ghost’s spinal cord.

Ghost’s condition significantly improved after surgery, and he was able to move all his legs but was still unable to walk. Dr. Sturges was hopeful that would change as he healed from the surgery. He was hospitalized for three days and discharged to foster care with instructions for therapeutic exercises to stimulate Ghost’s muscles and maintain good range of motion in his joints.

By the time Ghost returned to UC Davis for his 2-week recheck examination, he was walking as if nothing happened. The decompression surgery was a success, and Ghost continued to grow stronger every day.

He is now healthy and awaiting his forever home. Lori Swift and her family have been fostering Ghost throughout the entire process and are hoping to make him a permanent member of their family.

“After all we have been through with Ghost, I couldn’t imagine life without him,” said Swift. “We’ve carried him everywhere in a sling or a stroller, slept next to him to help him go potty in the night when he could not walk, and not left him alone ever during paralysis and through recovery. He is already pretty much part of our pack.”