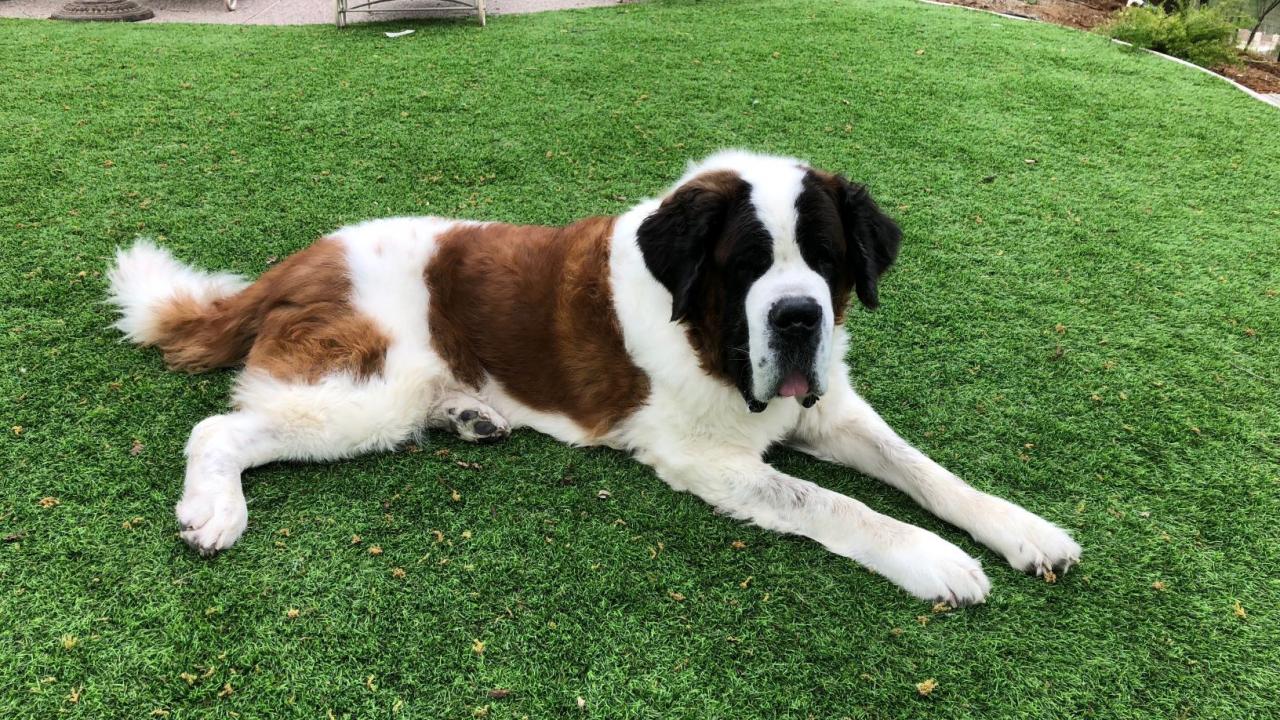 Max, 7-year-old Saint Bernard, started having issues getting up and walking. It was clearly more than just a dog getting older, so his owners Joe and Kris Schratz took him to their primary veterinarian who administered therapy treatments in hopes of improving his condition. When Max’s limbs started getting progressively weaker, the veterinarian recommended taking him to the UC Davis veterinary hospital.

An MRI revealed compression of Max’s spinal cord caused by intervertebral disk disease, a degeneration of the cartilage between his vertebrae which normally act as a cushion between each vertebra. As the disk becomes mineralized or calcified over time, the abnormal disk material in the center can extrude out towards the spinal cord, resulting in compression, bruising, and sometimes bleeding around the spinal cord and subsequent neurological signs, such as Max’s legs becoming weak.

The Neurology/Neurosurgery Service performed surgery to remove the disk material compressing his spinal cord, allowing nerves to regain function. Max recovered from surgery well, but due to his size (170 pounds) and the chronicity of his weakness, his recovery was expected to take several months. Max was hospitalized in the care of the neurologists for two weeks after his surgery.

With the implementation of physical therapy, small improvements were made in Max’s condition, and there was an increase in voluntary movement and placement of his limbs. While he could only bear minimal weight on his limbs, the goal of his immediate recovery was to slowly regain strength in a controlled manner.

During the second week of hospitalization, Max’s physical therapy was administered by the Integrative Medicine Service which began passive range of motion exercises every four hours, as well as utilizing a physical therapy balancing ball twice daily. Following discharge, Max continued his rehabilitation with the service for nearly three months, coming to the hospital five days a week at first. Since Max’s family lives more than an hour from Davis, he stayed at a local veterinary care center that provides paraveterinary services and facilitates patient transport to the hospital.

Max’s family—including his best friend Casper, a white Alaskan malamute—would travel to Davis twice a week to visit. This always lifted his spirits, according to Mrs. Schratz. After a month of rehabilitation, Max was able to return home for 10 days over the holidays. His family helped him continue his workouts, which included walking in his cart and performing “bicycling” exercises on each of his limbs 20 times, twice daily. These activities kept his muscles and joints healthy until he could return to the hospital for two more months of rehabilitation.

“When we went back to rehab after the holidays, that’s when we started to really see an improvement in Max’s condition,” said Mrs. Schratz.

For the next two months, Max’s therapy focused on muscle strengthening which included exercises and hydrotherapy on the hospital’s underwater treadmill.

Now, more than a month removed from his long rehabilitation, Max is back home and is able to walk and trot. Most importantly, his spirits are high, and he and Casper are enjoying their time together once again.

“I don’t think we realized how much we missed him until he was home permanently,” said Mrs. Schratz. “I can’t say enough great things about the team at UC Davis. Everyone we worked with was just amazing.”