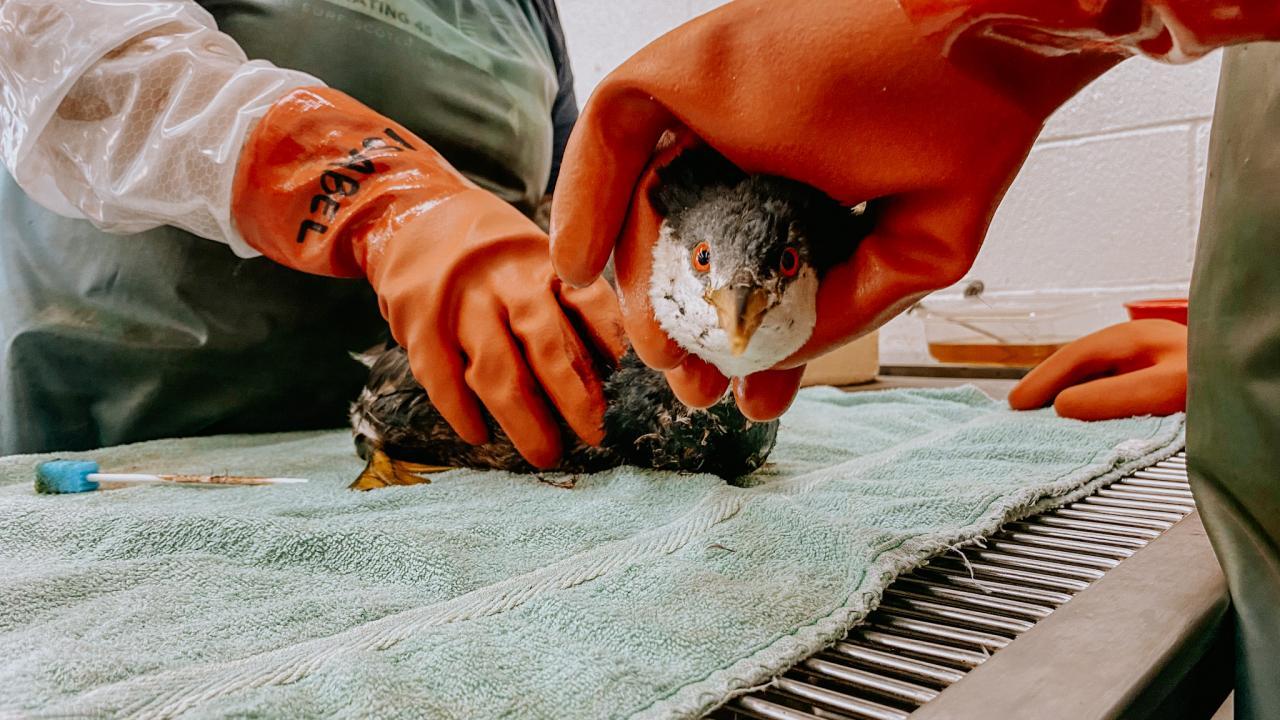 Updated 4 p.m. Oct. 11: Responders with the UC Davis Oiled Wildlife Care Network, a program managed by UC Davis, continue to provide veterinary care for animals impacted by the Orange County oil spill, which has leaked at least 25,000 gallons of crude oil into the ocean since early October. While devastating, it could have been even worse. The spill occurred just after nesting season and before migratory season — a window of time with relatively few birds in the area. 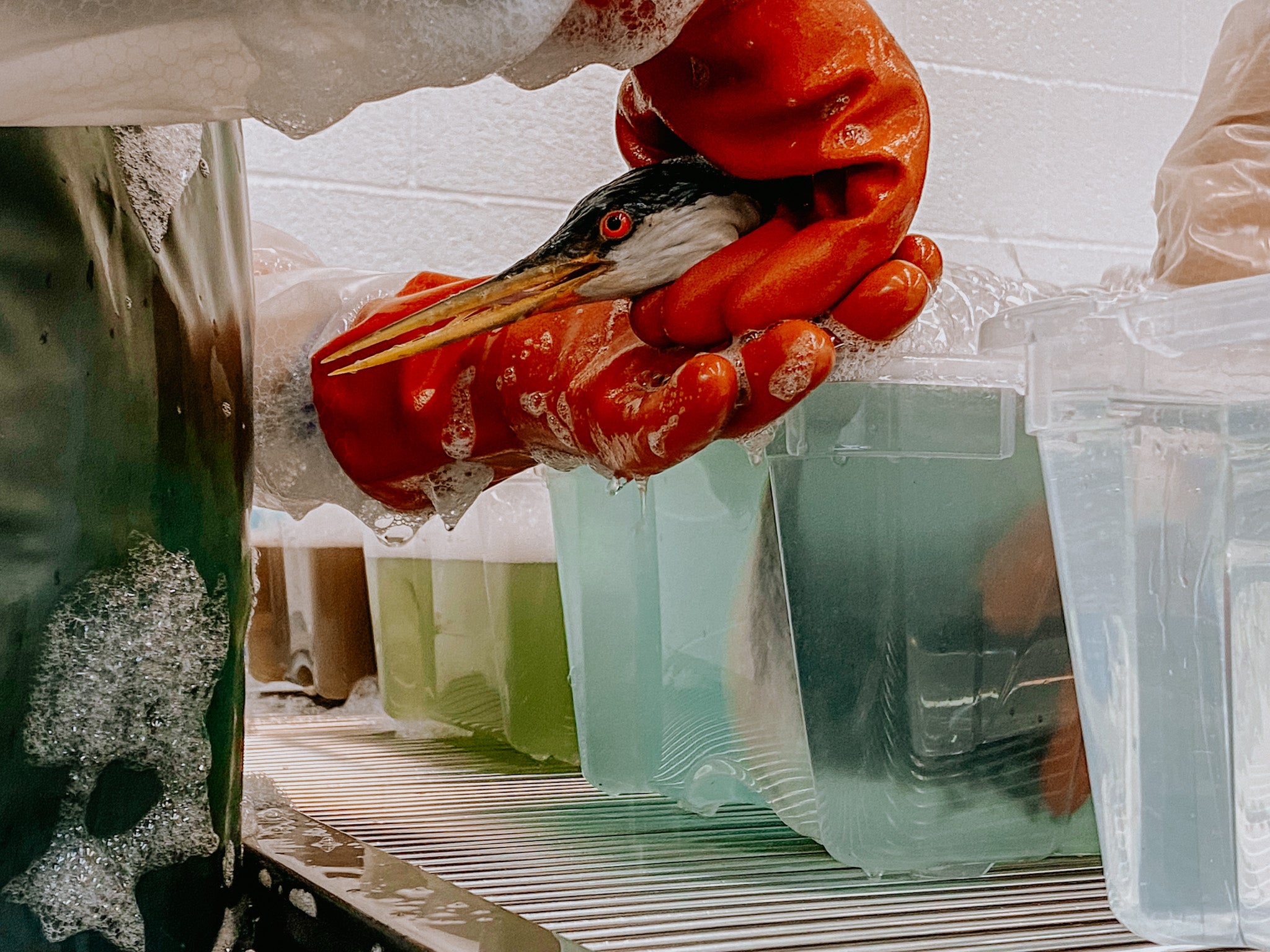 An oiled grebe is washed by members of the Oiled Wildlife Care Network at its primary care facility in San Pedro, California on Oct. 9, 2021, following the Orange County oil spill. (OWCN/UC Davis)

More than 80 responders from 14 of OWCN’s 44 member organizations have been involved in the effort. As of the evening of Oct. 10, OWCN team members had recovered 65 birds and nine dead fish. Among the 27 live birds recovered are grebes, a ruddy duck, sanderlings and — the VIPs of the facility — seven federally threatened snowy plovers. You can keep track of daily updates at OWCN’s pipeline incident webpage. 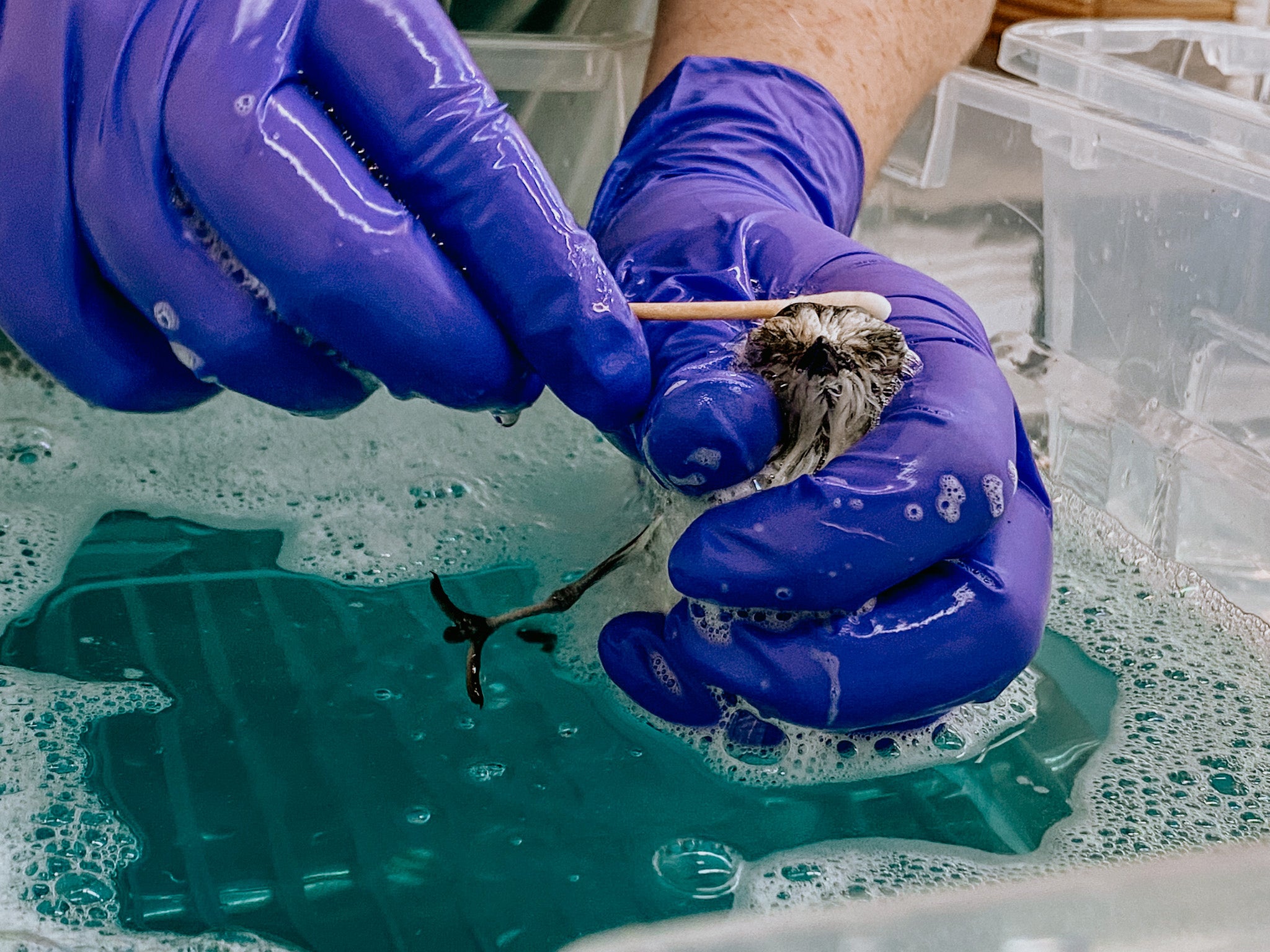 Some of the birds are expected to be released to a clean environment later this week. That experience of sending healthy, formerly oiled birds back to their environment is the most rewarding of OWCN director Mike Ziccardi’s career. Ziccardi, who also directs the UC Davis One Health Institute, has responded to more than 50 oil spills.

He told NPR Morning Edition on Monday: “When you can get an animal that comes in as heavily coated as you mentioned, and actually see them fly off or swim off at the end of the spill, there is nothing better than that.”

Oct. 6 original story: A thick slick of crude oil leaking from a loaded tanker stretched across the ocean toward Huntington Beach. It blackened miles of popular Orange County beaches, threatening wildlife and wetlands.

That was 1990, when the American Trader oil tanker struck its anchor, releasing more than 400,000 gallons of oil into the Pacific Ocean. It was a disaster. It also inspired the creation of the Oiled Wildlife Care Network, managed by the UC Davis School of Veterinary Medicine.

More than 30 years later, the OWCN is coming full circle at Huntington Beach, leading the wildlife rescue and response effort for another major oil spill there. This time, the Orange County spill, which began Oct. 2, has spilled as much as 126,000 gallons of oil, threatening area wildlife.

It’s exactly what the Oiled Wildlife Care Network trains for. 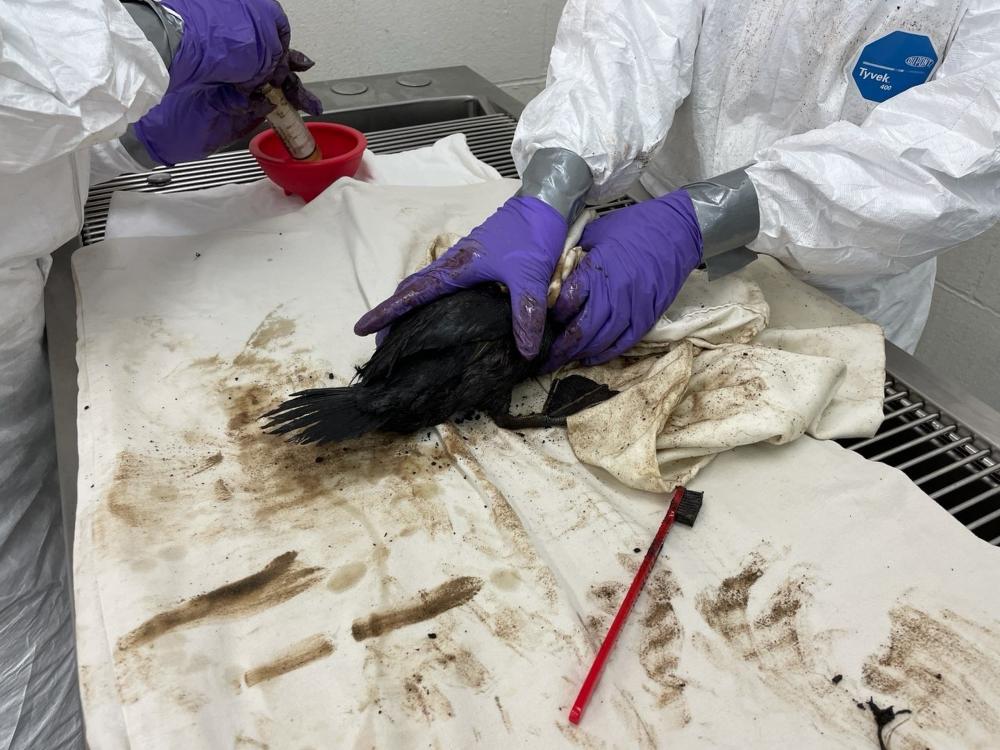 An oiled ruddy duck affected by the Orange County oil spill is treated on Oct. 3 by professionals with the Oiled Wildlife Care Network. (OWCN/UC Davis)

OWCN is managed by the UC Davis Karen C. Drayer Wildlife Health Center on behalf of the California Department of Fish and Wildlife’s Office of Spill Prevention and Response. Founded in 1994, its network of more than 40 partner organizations include nearly 2,000 trained people it can tap to mobilize at a moment’s notice whenever an oil spill occurs in California.

OWCN has also served as a model for other wildlife disaster response networks in the state, including the newly formed California Veterinary Emergency Team and Wildlife Disaster Network, both coordinated through UC Davis. 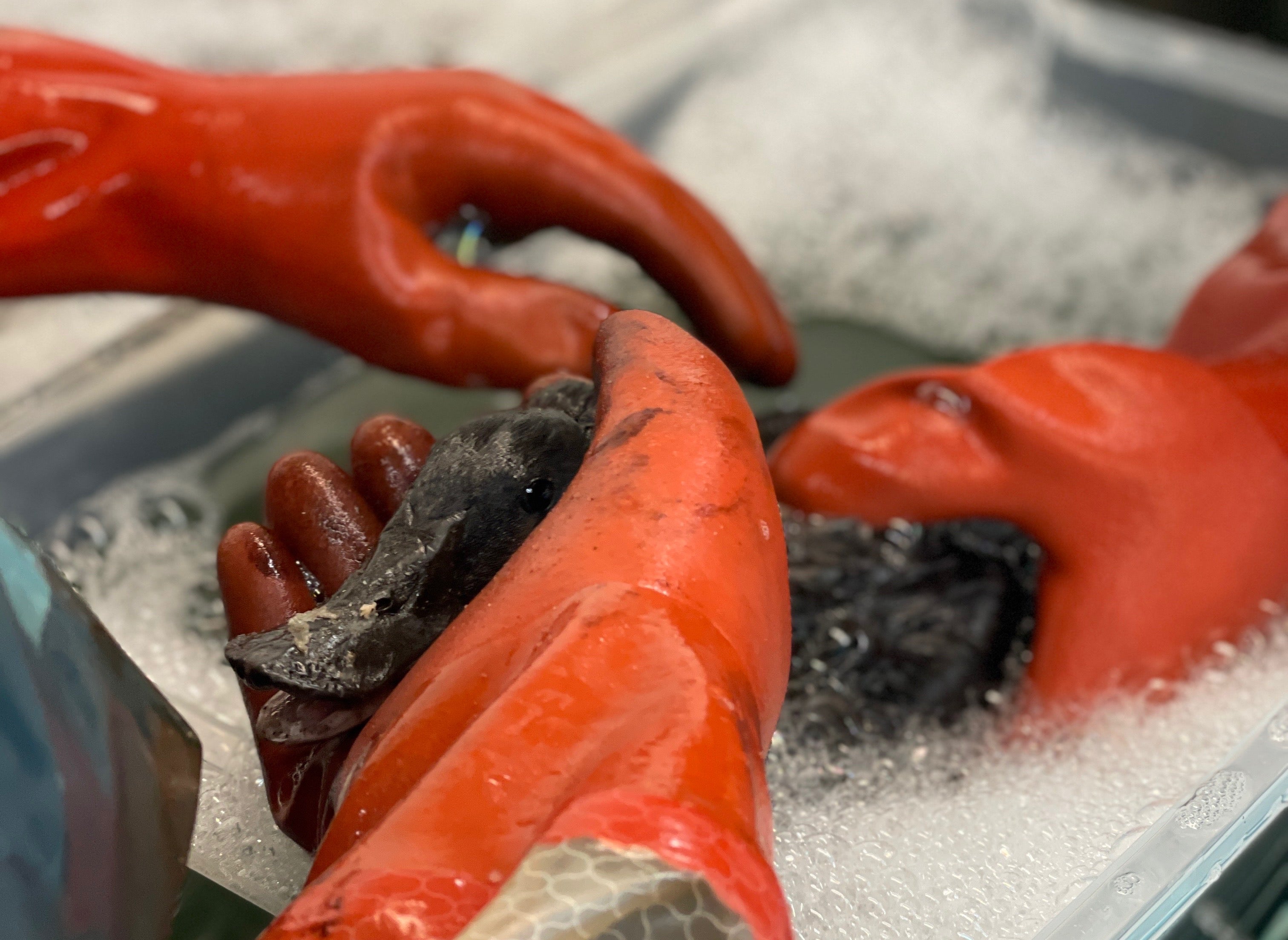 A ruddy duck covered in oil is washed at a primary care facility. (OWCN/UC Davis)

“Our mission is to provide the best achievable capture and care to oil-affected animals,” said OWCN Director Mike Ziccardi at a press conferencein Huntington Beach on October 4. “Right now, that is allowing our pre-trained staff to get out there and get those animals collected quickly, get them back to our purpose-built facilities, and start to give the rehabilitative care that is necessary to get them back into a clean environment.”

OWCN has led more than 75 spills throughout California and cared for more than 10,000 oiled birds, mammals, reptiles and amphibians during its history. The team averages a 50-75 percent success rate in recovering oiled animals and returning them back to a clean environment.

The spill in Orange County is large, with oil reported on nearly 16 miles of shoreline. Yet, so far, the team has been surprised to find relatively few oiled animals.

“We are cautiously optimistic that the number of oiled animals requiring care will be low,” Ziccardi said.

As of October 6 there have been 15 birds— including a brown pelican, ruddy duck, American coots, a sanderling, Western gulls, and several grebes—recovered. The brown pelican had to be humanely euthanized due to a chronic, unrelated injury. OWCN posts animal totals each day on its Pipeline P00547 Incident web page. 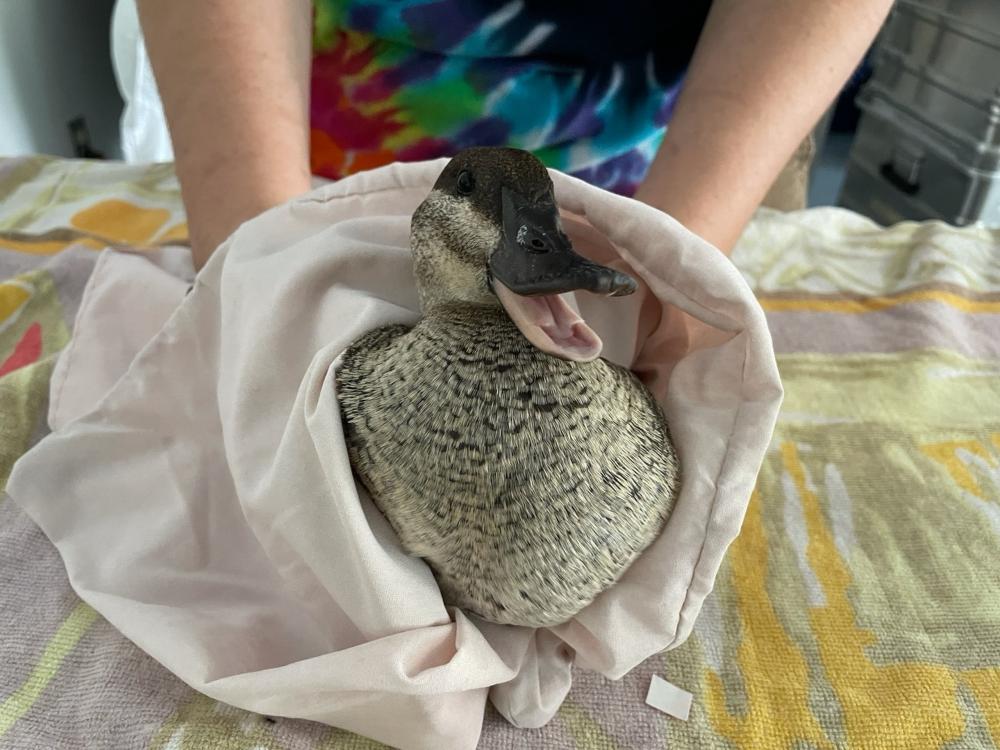 A ruddy duck on Oct. 5 after being cleaned of oil at the Los Angeles Oiled Bird Care and Education Center, part of the Oiled Wildlife Care Network. (OWCN/UC Davis)

A recovery group is actively searching from north of Bolsa Chica to San Onofre on foot, in trucks, in utility-terrain vehicles and by boat for oiled animals. When birds are found, they transport them to a rehabilitation facility in Huntington Beach, where a field stabilization team provides basic care, such as warmth, nutrition and time to rest. A second facility in Laguna Beach is on stand-by should oiled marine mammals be found.

Then affected birds are moved to OWCN’s primary care facility at the Los Angeles Oiled Bird Care and Education Center, home to International Bird Rescue. That’s where wildlife veterinarians and vet professionals examine, care for, wash and treat oiled birds. Once completely normal, they can be released to a clean environment in the wild. 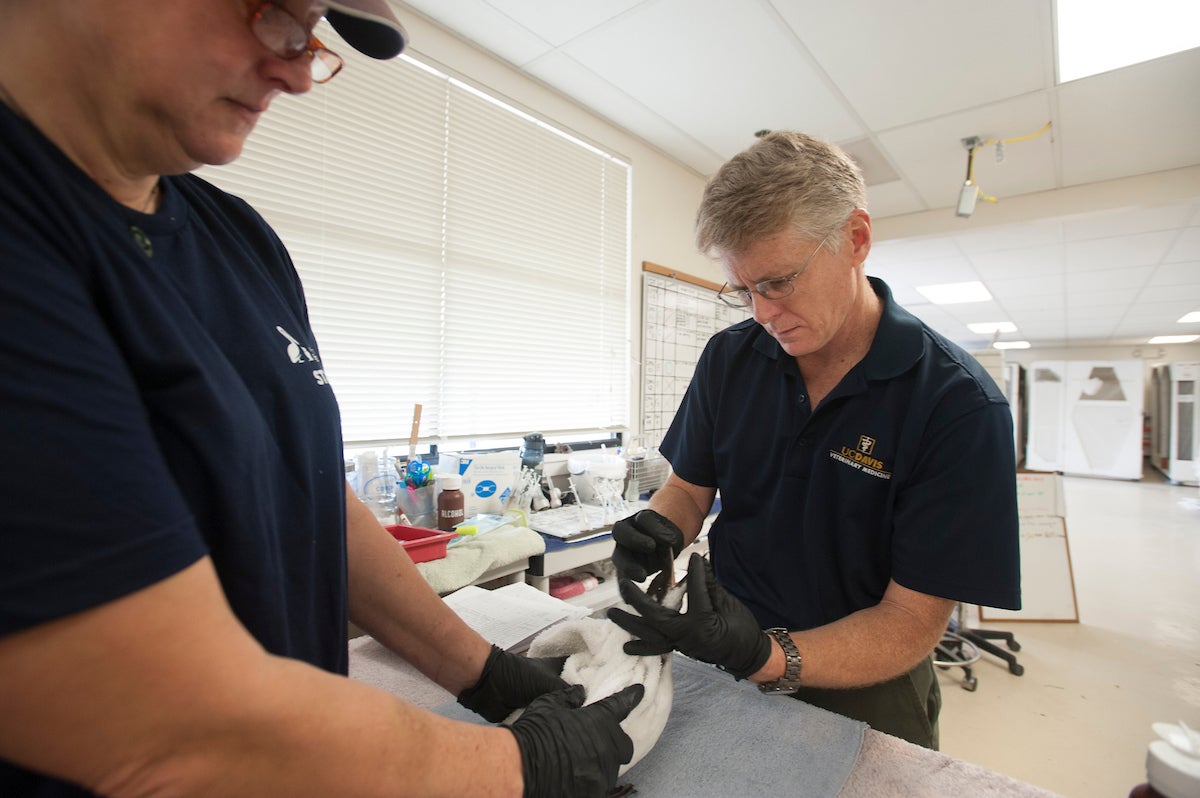 Oiled Wildlife Care Network Director Mike Ziccardi examines a bird impacted by oil following the 2015 Refugio spill in Santa Barbara, where more than 142,000 gallons of oil leaked into the ocean. OWCN has led more than 75 spills in California since it was founded in 1994. (Gregory Urquiaga/UC Davis)

OWCN staff are often asked what the public can do to help. A very important way is to not attempt to catch oiled wildlife. It’s not safe for the animals or the humans trying to rescue them, as oil is a toxic substance. Instead, the best way to help is to report oiled animals to the OWCN hotline, 877-UCD-OWCN (823-6926)

Marine animals evolved to survive fierce storms, strong winds, and ocean swells that would kill most humans. Fossil fuels, however, have introduced islands of plastic, higher temperatures, ocean acidification and gallons of oil to their ocean world.

The veterinarians with OWCN can’t save all wildlife from such human-made disasters, but the lifeline they extend is helping thousands of animals have a fighting chance.