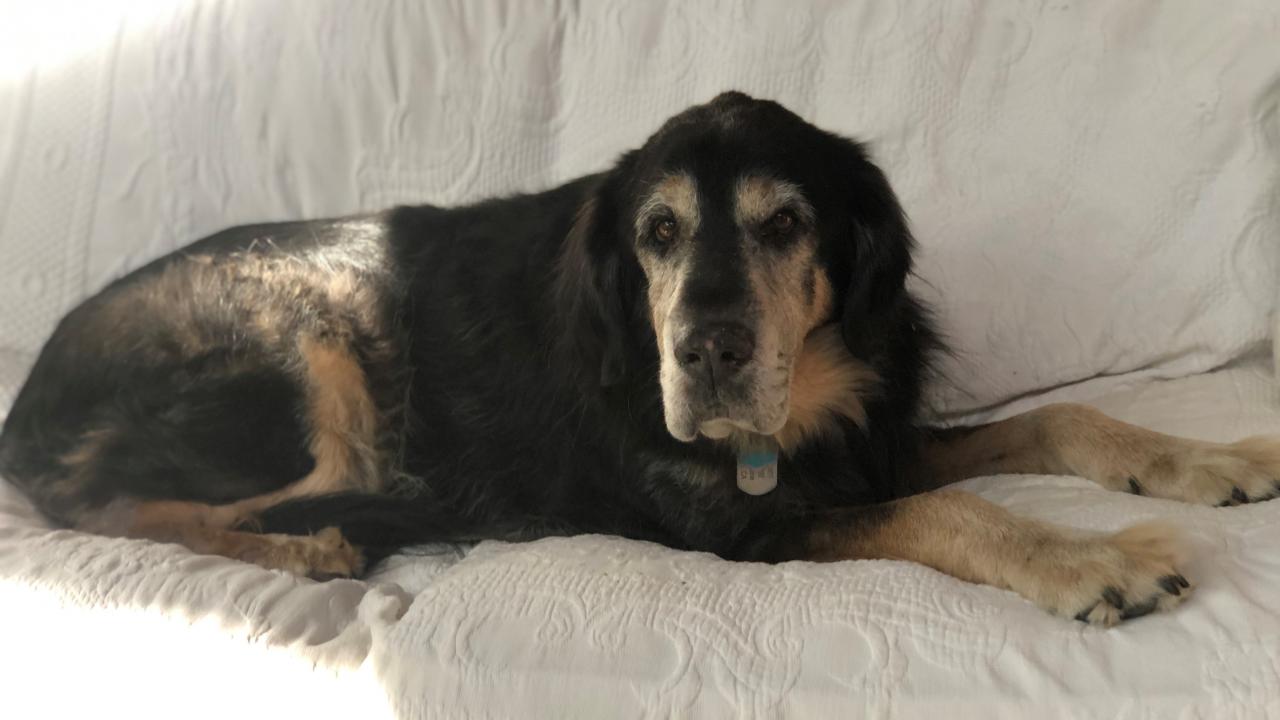 Boone, a 9-year-old male greater Swiss mountain dog, was previously diagnosed with stage 3 malignant oral melanoma based on the size of the tumor and spread of the tumor to his lymph nodes. His owner, Danae Unti, decided to bring him to the cancer specialists at the UC Davis veterinary hospital for further evaluation after their local veterinary oncologist suggested they seek further care at the university.

Malignant melanoma is the most common oral tumor in dogs. It is an aggressive cancer that can rapidly grow and invade structures around the mouth, and can spread to other areas of the body. Stage 3 oral melanomas have reported median survival times of approximately six months with treatment.

A top priority for oral melanomas is to gain local control of the tumor. In some cases, this can be effectively achieved by surgical removal. Based on Boone’s initial CT scan, surgery would be very aggressive and unlikely be able to remove all of the tumor.

Palliative radiation therapy was another treatment option that was discussed with Ms. Unti. This could help shrink the tumor and prevent it from growing further while decreasing pain and inflammation. The typical palliative radiation protocol for dogs with melanoma requires one treatment weekly for four consecutive weeks. With this option, the local control rate for melanomas is approximately 80 percent, with most dogs dying of tumor spread within four to six months.

Chemotherapy has not been shown to prolong survival, but in a study with dogs with bulky disease, approximately 30 percent of tumors shrunk with the therapy. There is also a melanoma vaccine available that is another treatment option that may help some patients, although results are controversial.

Finally, a current UC Davis clinical trial for oral melanoma was discussed. Boone was eligible for the trial, which is designed to assess the use of a drug called Zox, which is being developed by the company Omniox, to make tumors like Boone’s more susceptible to radiation therapy and help induce the immune system to attack the tumor. These tumors are often resistant to radiation because they rapidly outgrow their blood supply and are therefore hypoxic (lacking oxygen), and radiation works better at killing tumors when there is oxygen present. It also may help in reducing local immunosuppression.

After being administered Zox, Boone began four weekly rounds of radiation therapy on the hospital's state-of-the-art linear accelerator. By the fourth round, his tumor shrank significantly. At a two-week recheck appointment following the radiation treatments, there was no visible tumor on Boone’s oral examination. Boone continues to do well. Ms. Unti is grateful for the extended time the clinical trial has given her with Boone.

While Boone’s tumor may reoccur or spread, there is no sign of his tumor currently. Both Ms. Unti and Dr. Michael Kent feel that the clinical trial has extended his life and has improved his quality of life.

“Boone is doing well now seven months after his diagnosis,” said Dr. Kent. “It’s promising to see these types of results, and I’m excited that we can offer these new treatments to our patients and offer hope for a really tough disease.”

UPDATE (December 2020): Boone is still thriving at 12 years old, nearly three years after his participation in this clinical trial.