It is a reassuring feeling to know exactly what you want to do in life. It not so reassuring to be certain of what you want to do, only to realize that your former aspirations are no longer in line with your heart. I knew I still wanted to be a vet, but my career goals became much less clear as I was introduced to the many facets of veterinary medicine. I realized there were so many more opportunities than I could have imagined, and so I decided that I needed to explore my interests and try something wildly outside of my comfort zone.

In October of 2016, I attended the global externship talk and saw the many opportunities that veterinarians and veterinary students have abroad. I was drawn to the idea of going to Africa because of the biodiversity and the opportunities for rural medicine and One Health work. This lead me to contact Dr. Conrad. After discussing with her what I wanted out of my summer, she put me in contact with her student Dr. Amanda Berrian, a veterinarian pursuing a PhD in the field of epidemiology and One Health. Together, along with help from Dr. Jacques van Rooyen from the University of Pretoria, we developed a project with the Mnisi Community Program in South Africa that helped answer questions that came up in previous collaborative studies between UC Davis and University of Pretoria. The study looked at the role of gender in One Health risk factors. I would be surveying people in four villages in the Mnisi study area, a resource-poor community at the interface of wildlife conservation areas near Kruger National Park in South Africa.

After many months of literature reviews and filling out funding applications, I set off for South Africa. I was stationed at the University of Pretoria Hans Hoheisen Research Station at the Orpen Gate of Kruger National Park, where I was surrounded by amazing wildlife. Each morning I was woken up by the sound of a hornbill tapping on the window, or a herd of elephants thundering past the station, and my drives to the villages were filled with impala, kudu, lion, and leopard sightings.

My project was a mixed methods study, employing both quantitative and qualitative data collection. I spent the first six weeks surveying people in the villages about the tasks they do, from jobs involving animals to household work. I worked with two University of Pretoria Environmental Monitors, Stanley and Addlove, who acted as my translators and guides. After initial questionnaire data collection, I held several focus group discussions where I talked to survey participants in depth about their answers to the questions, gained insight about what their daily lives were like, and learned about their perspectives of their culture, the division of labor, and the roles that animals play for the people there. I also got to accompany the University of Pretoria veterinary students on their calls out to the village, as well as shadow them at the Hluvukani Animal Health Clinic. I saw a completely different side of veterinary medicine. It was true rural medicine, where cases ranged from fashioning a splint for a steer with a broken leg out of firewood to the attempted repair of the jaw of a dog with extensive, human-inflicted head trauma. In addition to working on animals from the villages, I was able to go out on a veterinary intervention for a rhino injured by a poacher, where I learned not only about the realities of wildlife medicine, but also about the impacts of poaching in South Africa.

As a first-time traveler, it is safe to say that I had no idea what to expect. From discovering that there was no public transportation (including taxis), to driving on the opposite side of the road, to being prohibited from walking around the research station due to a leopard being on the loose, every day was a new adventure. The experience was exhilarating and challenging, and I gained a new outlook about a different way of life and on diverse aspects of veterinary medicine. Thank you to the UC Davis SVM Office for Global Programs for the experience; because of the opportunity they provided, I truly grew as a person and as a veterinary professional. 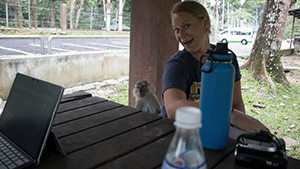 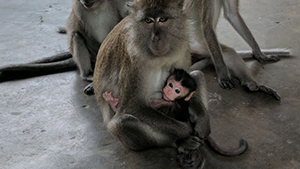 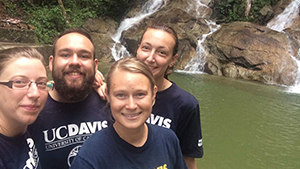