This summer I was fortunate enough to work in Spain and Sardinia (a large Mediterranean island located off the southwest coast of Italy) for five weeks to research the risk factors associated with the persistence of African Swine Fever in the pig and wild boar population on the island of Sardinia. African Swine Fever (ASF) is a re-emerging and transboundary swine disease with devastating consequences for the pork industry. It is a viral hemorrhagic disease that affects both domestic and wild pigs and that can be transmitted directly (pig-to-pig contact) or indirectly though pork products, other fomites or through ticks. There is no vaccine or treatment and prevention depends only on strict biosecurity measures. Due to the persistent ASF infection on the island, both wild boar and domestic pig populations, pig exports have been banned in Sardinia since 1979, although with some exceptions to allow exports of meat from outside the high-risk zone for ASF. This, of course, has had negative ramifications for the pork production industry of Sardinia.

I began my trip in Madrid, Spain, at the Universidad Complutense de Madrid (their veterinary school) where I was introduced to the team that has helped form the eradication program for ASF in Sardinia, and to meet some of the key players actively studying the topic and helping inform policy on eradication measures. There, I was able to get a better idea of the challenges facing the eradication effort, get a comprehensive introduction to the project, and figure out how my efforts could best contribute to the task. We decided the focus of my project would be gathering economic information about the pork sector that would help predict how the economy of Sardinia would improve if they were successful in their ASF eradication efforts and thus could export pork products again. Because there are a large number of small, nonprofessional pig farmers in Sardinia now, the hope is that with this project, farmers can see a clear incentive for professionalizing their farms, following stricter biosecurity measures, and eventually increasing their operations to potentially become profitable suppliers of pork, both in Sardinia and abroad. I would also be continuing to investigate risk factors that contribute the spread of ASF transmission, despite stringent regulations involving pig movement and biosecurity put into place by the local veterinary field officers.

Next, I flew to Sassari, a city in the north of Sardinia, and met with the Direttore Generale of the Instituto Zooprofillatico della Sardegna. He oversees the majority of the public health veterinary work in Sardinia, especially related to the eradication of ASF, legislation, and enforcing regulations. With his help, I was able to spend a few days in the diagnostic laboratory facilities where all the pig and wild boar samples are tested for ASF and outbreak information is compiled. I also attended meetings related to outbreak investigation and control, where I got a better grasp of the true risk factors of ASF (non-professional pig farmers with high-risk biosecurity practices, the presence of free-range pigs on the island, and illegal trade of pig and pork products mostly in remote geographic locations) and the unique challenges the traditional culture of Sardinia and their farming practices impose on instituting such an eradication program. While these meetings were carried out in a hybrid of Italian and local Sardinian language, I was lucky enough to have a woman with me from the lab that spoke very good English and could translate for me. A highlight was riding along on a day of farm calls with one of the regional Sardinian veterinary officers, who essentially drives around the picturesque Sardinian countryside in a Fiat each day looking for illegal pigs and dropping in on local farmers to make sure their pigs are healthy, and that they are following biosecurity laws. (This is usually followed by some delicious caffe and little pastries, naturally.)

A few weeks later, I took the train south to Cagliari, the beautiful capital that happens to sit on a beach. Here, the majority of my research and data collection took place, as I spent most of my time at the Epidemioligcal Observatory of Sardinia (the office that collects all the agriculture and veterinary epidemiological data for the region and analyzes it for statistics). I visited a plethora of government offices all over the city with my cohort of Sardinian veterinarians and statisticians, as they helped me to compile economic information from slaughterhouses, regional public health offices, and the ministry of agriculture. From this I was able to completely map the pig production value chain, specifically exploring all the options for what happens to a pig once it leaves a farm, in order to better determine if regulations for pig movements are being followed appropriately. I also collected pricing and market information on many of their pork delicacies for my economic model. Not all my work was just meetings and data analysis, though! One day, two of my colleagues took me on an extended day hike through the Sardinian mountainside to look for the “brado” or illegal, unowned pigs that are responsible for most of the continued spread of ASF in the region. They weren’t hard to find!

My adventure in Spain and Sardinia was a whirlwind, but completely rewarding. From attempting to learn the local language, to weekend adventures to national parks, looking for wild boar and “brado”, eating my body weight in gelato, and becoming more comfortable as a solo-traveler, I learned an incredible amount about not only my research topic, but an invaluable set of life skills that I know will continue to work for me in the future, especially as I continue to travel. A huge thanks to Dr. Beatriz Martinez Lopez, who helped plan the project and get me set up with wonderful contacts abroad; Esther Kukielka, who got me on my feet with the stats software; my wonderful hosts and coworkers abroad who helped me find my way around and helped me get all the data I needed for my project; and the Office for Global Programs at the SVM for funding the opportunity. 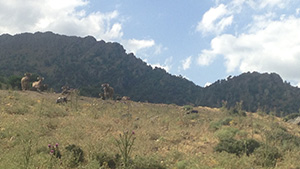 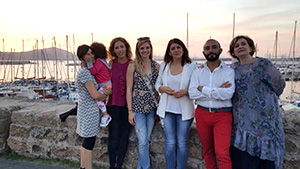 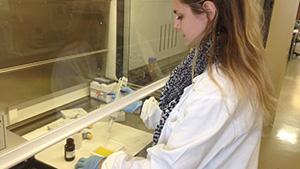