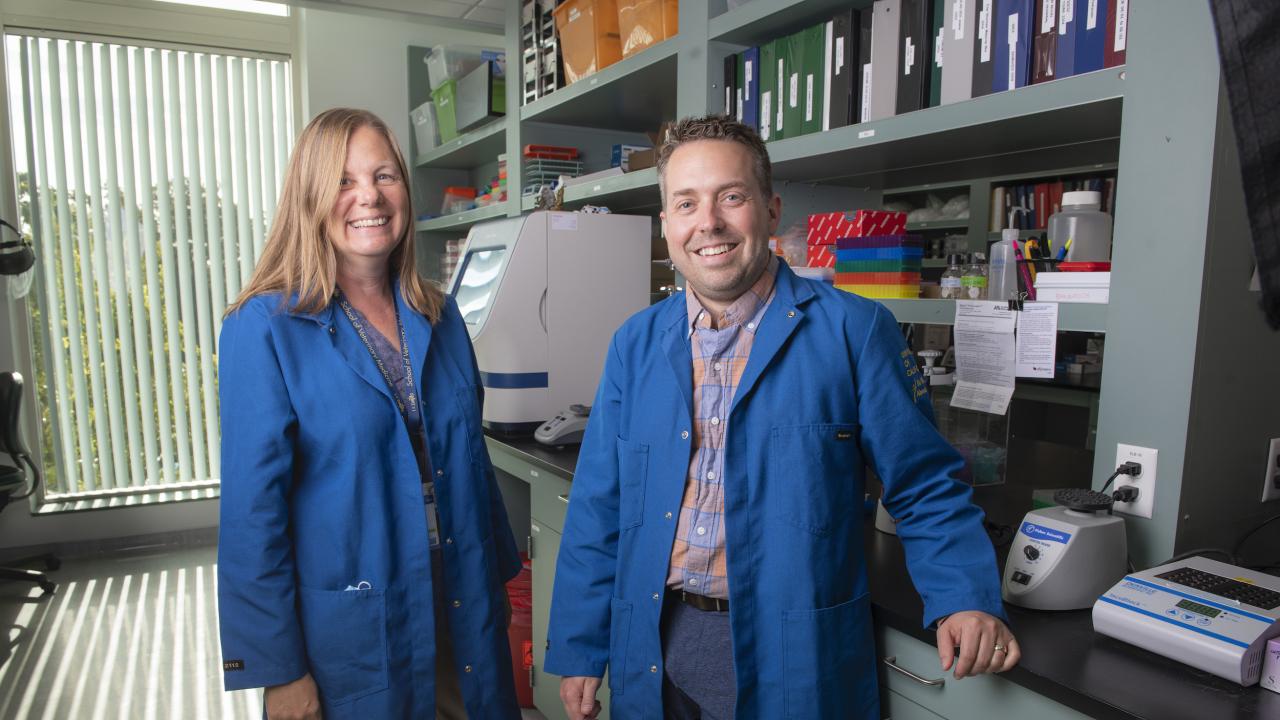 Unlocking the Genetic Code to Disease

From the CCAH Update Fall 2021 issue

What determines your dog’s reddish coat or their long, fluffy tail? Genetics — or the study of how particular physical traits are passed from parents to offspring. This scientific field also applies to understanding disease inheritance.

Drs. Danika Bannasch and Josh Stern at the Center for Companion Animal Health approach genetic studies from several angles. Bannasch identifies mutations in an animal’s genetic code or DNA that correlate to a particular disease to develop tests that can decrease that disease incidence. Stern’s approach is more clinically based as he unravels the genetic mechanism of a disease to develop novel therapies.

A recent example involved hypertrophic cardiomyopathy (HCM), a heart disease that affects 1 in 7 cats. Stern and other researchers led a clinical trial to look at how a cat’s DNA alters how it responds to clopidogrel, a commonly prescribed life-saving medication to prevent blood clots in cats with HCM. Data showed that nearly 20% of cats had resistance to the therapy.

“This study was about figuring out why some cats weren’t responding as expected to clopidogrel therapy and leading us towards a more effective prescription,” said Stern, who also serves as the chief medical officer for the UC Davis veterinary hospital. “Understanding how genetic mutations in cats reduces the effectiveness of this treatment can help us personalize medicine for them, just as physicians do for particular human diseases.”

Bannasch and Stern also pointed out the translational value of genetic studies for people. Last fall, several faculty members at UC Davis School of Veterinary Medicine published a study in the journal, Genes, that identified the mutation for succinic semialdehyde dehydrogenase (SSADH) deficiency in Saluki dogs. It’s a rare neurological disease that closely resembles a similar condition in humans.

“We were able to help establish the only translational large animal model for the development of novel therapeutic strategies for people who suffer from this condition,” said Bannasch, who holds the Maxine Adler Endowed Chair in Genetics.

Genetic studies have changed dramatically in the past several decades with the evolution of advanced molecular tools, she explained. We’ve come a long way from the 1950s when scientists spent many years using cross breeding and large pedigrees to identify chromosomes associated with disease. Whole genome sequencing now makes it possible to test a single dog for an inherited disease and enable rapid, effective treatment.

“CCAH donors make all the science we bring to the public possible—and the improvements we’re able to make in animal’s lives,” Stern said. “Their support has provided seed money that leads to critical larger funding, including four NIH grants in recent years. Even if it’s a small amount, it gives us a huge advantage.”