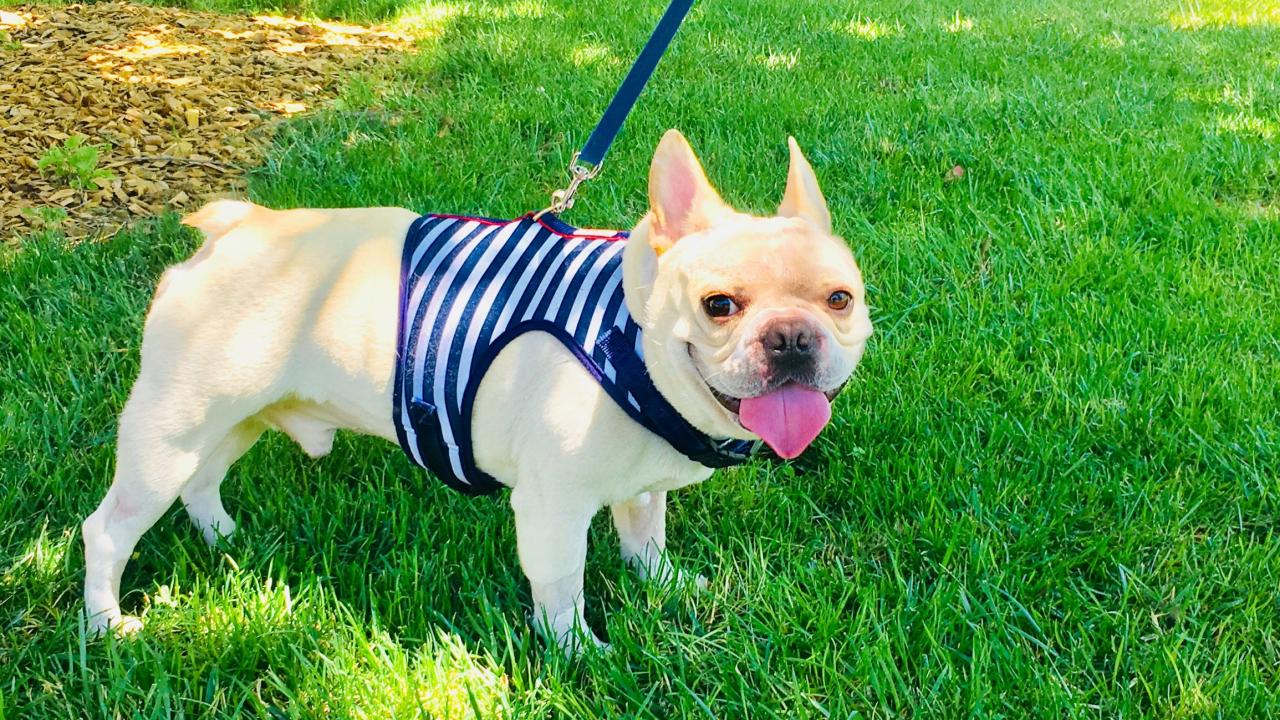 Dazzy, a 4-year-old male French bulldog, began having seizures and acting aggressive toward strangers – a behavior he had never previously displayed. His owners took him to see their primary veterinarian who ultimately referred them to a neurologist near their home in Southern California. An MRI performed by the neurologist revealed a left intra-axial cerebral mass, most consistent with a glioma (brain tumor).

By chance, that same day, Dr. Pete Dickinson of the UC Davis Neurology/Neurosurgery Service contacted that neurologist to share news about a clinical trial for dogs with brain tumors. Dazzy’s tumor—a grade III oligodendroglioma—was extremely aggressive and carried a poor prognosis. After realizing how severe the tumor was, they decided to enroll him in the trial.

The UC Davis Veterinary Center for Clinical Trials is continually exploring alternative methods to advance veterinary care for patients. Dazzy’s trial involves investigating whether small particles called nanoparticles can be used to better visualize tumors during surgery, and potentially to see if they will be a useful method to deliver drugs into brain tumors for treatment.

A team of neurology and oncology specialists at the UC Davis veterinary hospital felt that surgery plus radiation would give Dazzy the best chance for a prolonged life, and to try to reverse the aggressive behavior and improve his quality of life in the short term. Dr. Dickinson, along with fellow faculty member Dr. Beverly Sturges and neurology resident Dr. Devin Ancona, planned for Dazzy’s surgery to remove the tumor.

A craniotomy was performed, and the neurosurgeons cut into Dazzy’s brain to remove the large tumor, which equaled about 35 percent of the size of his cranium. A radiologist joined them for the surgery and utilized ultrasound to guide the surgeons to exactly where the tumor was located.

Dazzy did well during the surgery, and was hospitalized for five nights, spending the first night post-surgery in the Intensive Care Unit. MRI scans showed no visible tumor remaining following surgery, and Dazzy quickly recovered and was walking, eating and drinking well shortly after. Importantly, the aggressive behavior resulting from the brain tumor resolved, giving Dazzy’s owners back the pet they had always known.

Two weeks after surgery, Dazzy’s care was transferred to the Radiation Oncology Service where he was given 20 rounds of radiation therapy over the course of four weeks. Radiation treatments are delivered on UC Davis’ state-of-the-art linear accelerator, providing optimal cutting-edge therapy to maximize the treatment of Dazzy’s tumor. Dazzy came through the treatments with no adverse effects.

He will continue with his medications and be monitored by his primary veterinarians. While Dazzy’s immediate health is almost back to normal, the tumor is expected to return eventually. His veterinarians estimate that the surgery and radiation treatments have given Dazzy 1-2 more years of normal life with his family. The information gained from the delivery of nanoparticles to Dazzy’s tumor will be used to develop new treatments for brain tumors in both humans and companion animals.