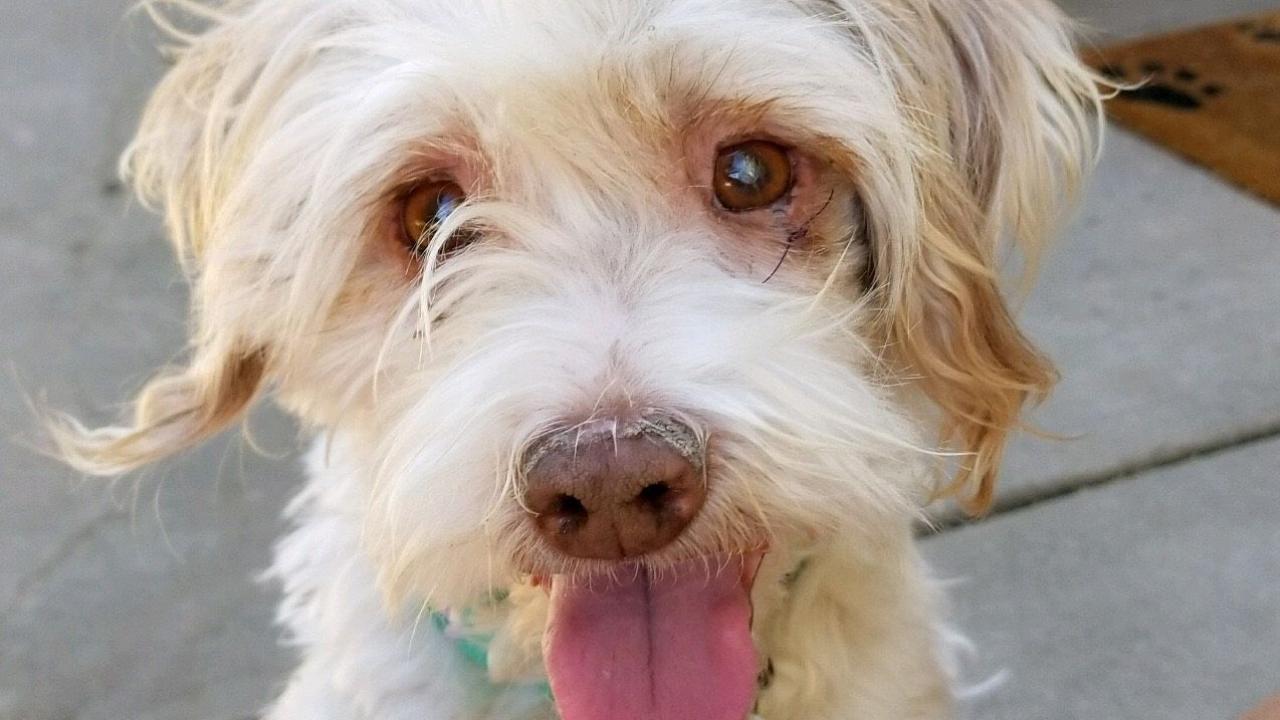 ***Davis Enterprise coverage of this story***

Bentley, an approximately 6-year-old male Maltese mix, was brought to the UC Davis veterinary hospital by the Underdog Animal Rescue after they saved him from a potentially non-adoptive situation (and facing euthanasia) at a county shelter.

While at the shelter, Bentley was diagnosed with cataracts in both eyes by the county’s veterinarian. His foster mom, Kris, reported he was able to see shadows and get around the house reasonably well, but would occasionally bump into things if the furniture was moved or things were out of place. She also believed him to be deaf, as he has never responded to his name or any type of noise. To improve Bentley’s quality of life and to give him the best chance for adoption, Kris decided to bring him to the ophthalmology specialists at UC Davis.

Ophthalmology resident Dr. Sydney Edwards and faculty member Dr. David Maggs examined Bentley and informed Kris that the cataracts were likely significantly decreasing his current vision. Worse still, as his cataracts continued to mature, there was an increased risk of secondary problems such as glaucoma (high pressure) and uveitis (inflammation) inside his eyes. Based on the appearance of his cataracts, both of Bentley’s eyes were considered good candidates for surgery, which the ophthalmologists recommended be pursued as soon as possible. However, there was a problem – Bentley also had a large laceration on the lower eyelid of his left eye, which was caused by being bitten by another dog at the shelter. The initial repair to that wound at the shelter failed and would have to be fixed before cataract surgery.

Kris was unsure how she and/or Underdog Animal Rescue would pay for the laceration repair, let alone the cataract surgery. Thankfully, many donors to the School of Veterinary Medicine have established Compassionate Care Funds to help animals in need. The George & Lois Root Fund was created to help rescue dogs, and was able to be utilized to pay for the laceration repair. Additionally, a long-term client of Dr. Maggs’ (and founder of the Toots Fund for ophthalmic clinical care and research at UC Davis) was having her dog examined at the same time that Bentley was having his eyelid repaired. She heard Bentley’s story and generously offered to pay for his cataract surgery.

Two weeks after his eyelid was repaired, Bentley returned to UC Davis and underwent cataract removal and placement of artificial lenses in both eyes. He recovered well from the surgery, and at his one- and three-week recheck appointments, the ophthalmologists and Kris were delighted with his progress. There was minimal inflammation, no sign of glaucoma, and his vision was excellent.

“Without sight or sound, Bentley’s life was quite limited,” explained Kris. “He has this happy face since the surgery. His life is completely different now with sight.”

Kris is determined to find the perfect forever home for Bentley, but wants prospective adopters to realize how critical ongoing care will be for him. Bentley will require daily eye drops and periodic rechecks with an ophthalmologist for the rest of his life.

“I’m not letting him go until he’s completely healed, and we find just the right person,” said Kris. “Bentley is a special one.”

Kris and her husband have six dogs of their own. In the past year, they have fostered 15 other dogs, ranging in timeframes of one day to two weeks. Bentley is by far their longest foster, having him now for three months.

“Taking care of Bentley and going through this process with UC Davis (to gain his sight back) is the most amazing experience we’ve ever had.”

This success story was made possible by generous donations to the School of Veterinary Medicine’s Compassionate Care Funds, which are used to help families defray costs involved with treating their sick or injured animals, and to treat shelter, stray and wild animals brought to the UC Davis veterinary hospital. Please consider continuing this legacy with a donation.